This delicious coconut water chicken soup has a natural sweetness from the coconut (without needing to add sugar), and bright notes from the lemongrass and ginger, making it the perfect light and refreshing soup for a rainy day or when down with a flu

Any Chinese person worth her- or his- salt will know that ginger warms the body and so, when the weather is chilly or after getting caught in snow or rain, one should drink some ginger tea or chicken soup to avoid catching a cold. (Conversely, one can also fall ill when one is too heaty and should then eat "cooling" foods.) This Chinese coconut water chicken soup with ginger and lemongrass is a delicious union of 2 flu-busting and healthy ingredients!

The first time I drank ginger soup was on a school trip to Taiwan: we had gotten drenched walking up Taiwan's famous Alishan (Mountain). Our concerned seniors promptly made us ginger soup and not one of us fell sick, which I attribute to the soul-warming soup! Although Traditional Chinese Medicine doesn't always have the best reputation, the warming properties of ginger are real- I say this based on extensive personal experience 😛 as well as actual scientific research. Other warming recipes include ginger red date and longan tea as well as osmanthus tea.

Note: this information is not meant as dietary or nutritional advice, but FYI only!

This coconut water & ginger chicken soup recipe is something my family has made many times and is very versatile:

Tip: If you like soupy noodles, you may also be interested in this quick and easy Chinese vegan wonton soup recipe that's ready in 20 minutes but doesn't need shop bought stock/ stock powder/ bouillon cubes etc.

The main ingredients in this light Chinese lemongrass chicken soup are:

If you've never used coconut water in your cooking before, I promise that this coconut chicken soup recipe will be revelatory: it brings a natural sweetness to your cooking, eliminating the need for any additional refined sugar- healthy and delicious!

Why use fresh coconut water in cooking?

It adds a hint of sweetness to the food, without the need for a pinch of sugar. (Too much refined sugar isn't good.) Some recipes which use coconut water include agar agar jelly, thit kho (Vietnamese braised pork) and Chinese coconut water chicken soup. 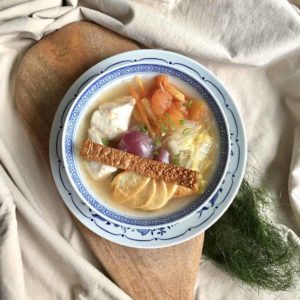 A light but warming chicken soup that makes one feel better when sick or when it's raining. No sugar necessary thanks to the natural sweetness of the young coconut.
5 from 3 votes
Print Recipe Pin Recipe
Prep Time 5 mins
Cook Time 15 mins
Course Soup
Cuisine Chinese
Servings 4 people

This serves 4 people as a side dish of soup or 2 people as a main (with noodles or rice) Remove the lemongrass and ginger before serving as they’re not easy to bite/eat. The shallots can be eaten but the texture isn’t great after simmering (it’s mushy), so you may want to remove it from the soup as well. You can pimp up the dish by adding various toppings such as: tau kee (fried beancurd), fried dried prawns (hae bee), spring onions etc If you really want to impress, you can make this soup by double boiling chicken meat in coconut water inside a coconut shell (you will need to remove some of the coconut liquid or it will overflow) along with the rest of the ingredients!

If you already use coconut water in your cooking, I'd love to hear about your recipe and to see photos of your Chinese coconut water chicken soup on social media- to tag me at @greedygirlgourmet!