12345 pork ribs are delicious, finger-licking Asian-style pork spare ribs that are as simple to cook as 12345 (a mnemonic device that will also help you recall the recipe, which is adapted from an Irene Kuo recipe ). Using only the pantry staples of wine, dark soy sauce, vinegar and sugar to braise the meat and only a few minutes of active cooking, this is the best easy sticky Chinese spare ribs for when you don't have time to do the grocery.

So why is this the best easy, sticky, Chinese pork ribs recipe?

The only thing to be mindful of is the sugar and dark soya: if you reduce that too drastically (for example, from 4 tablespoons of sugar to 1 tablespoon), you may not get as thick, sticky and dark a glaze as I did in the photo as sugar is needed for the caramelization of the sauce.

Cooking is meant to be fun so play around with the ratios, see which combination is your favourite and let me know! You can also use aromatics such as ginger, garlic or chilli to add a new dimension to the 12345 pork ribs sauce.

Chinese people like their meat slightly chewy, and the recipe, as originally shared on Food52, in my opinion, makes a great sauce but not such great meat as the flavour doesn't permeate into the meat. So here are 2 adaptations I've made to the original 12345 pork ribs recipe to solve that!

You should always, always, alwaaaaaayyyys brine your meat- in fact, do it as soon as you're back from your weekly shop! The original Irene Kuo recipe didn't include brining, and though the ribs were good thanks to the savoury sauce- we never have any leftovers- I felt that the meat itself, sans sauce, lacked flavour. Brining ensures that the flavour goes right into the meat and not just on the surface.

2. Simmer the ribs before adding in the sauce

Confession time: although I've just evangelized for brining meat, I don't always do it myself as my fridge often lacks space! If you want to eat these sticky glazed pork ribs Right Now, but don't have brined meat ready, an alternative is to simmer the ribs in water for 1 hour before adding the sauce in. (Keep the water the pork has simmered in: it's pork stock!) The meat then simmers in the sauce for another 40 minutes, after which it is perfectly juicy, tender and flavourful all the way through to the bone.

3. Use a light- coloured pot

You don't want to over-reduce the sauce or burn it, and using a pot with a light coloured base makes it easier to see how much the sauce has boiled down by. Do make sure you keep it on the fire till it is nice and thick to get a nice, sticky sauce!

4. Get meaty ribs in small pieces

Ask the butcher to chop the ribs up for you. If you don't have a butcher and don't want to mess around with cutting meat, the recipe still works with bigger pieces. However, smaller pieces are easier to coat and stir in the pot when reducing the sauce.

5. Pay attention when reducing the sauce

This reduction is key to caramelizing the meat. The sauce reduces fast so keep close watch on the braised pork ribs during the last few minutes! 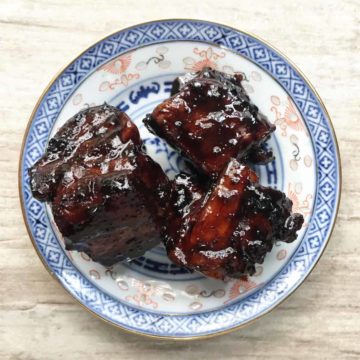 Note: Asian food is usually served with many other dishes- if you are eating Western style (where this dish is the main), the recipe will not serve 4 people! (You will need to increase the portion depending on your appetite- maybe double it for 4 people?) Optional: brine the pork ribs the night before. If you're unable to get spring onions, here is a list of good alternative garnishes.
Tried this Recipe? Tag me Today!Mention @GreedyGirlGourmet or tag #greedygirlgourmet!

Note: The portion size of these sticky glazed 12345 pork ribs is pretty small. If you want to increase the amount, keep in mind that the time required to reduce the sauce will also increase.

If you try this caramelized pork spare ribs recipe, let me know what you think! And if you feel that your original ribs recipe is a better contender for the title of Best, Easy, Sticky Chinese Ribs Recipe, I'd love to learn how you cook yours!