Taiwanese green onion pancake (Cong you bing), also known as Chinese scallion pancake, is a delicious savoury street snack that is easy to batch make and freeze- it can be cooked from frozen, making it the perfect food for when you have unexpected guests or run out of dinner ideas. It's a simple recipe beloved for its flaky texture, but those are often the hardest to make right, and I've used 6kg of flour to figure out all the tips and tricks you'll need to know to make perfect flaky scallion pancakes!

Also known as Chinese scallion pancake, spring onion pancake or cong you bing (葱油饼), green onion pancake is a popular snack sold by street vendors in China and Taiwan. It's a Chinese savoury, unleavened flat bread that is filled with green onions/ scallions- you can almost think of it as the Chinese equivalent to pizza.

A good Taiwanese green onion pancake should smell fragrant, look golden, taste crisp and flaky on the outside but soft and chewy on the inside, thanks to the many layers created by folding the thin dough. (Chinese food is all about se xiang wei ju quan 色香味俱全 - i.e. food should have colour, aroma and taste.) When you tear the pancakes with your hands, you should be able to see individual thin layers inside.

If you use the white part of the scallion, remember to cut it in half lengthwise before slicing in small pieces, so that they don't form lumps in your filling later.

To make scallion pancakes, you only need 4 ingredients (I'm not counting the water!):

To make the dipping sauce, you will need 2 more pantry staples:

The above optional additions can be added to the spring onions, but if you want something totally different (a sweet pancake, for example), try 1 of these instead of the scallions:

How to shape the pancake

You want to roll the dough into a thin rectangular shape- the thinner the dough, the more layers you will get later. As we roll with uneven pressure, the edges usually tend to be thicker than the middle of the dough, so pay attention to those areas. (You can see how the top of my rectangle is fatter than the bottom!)

2. Apply the filling onto the dough- you can use a brush or the back of a spoon. Make sure to leave some empty space around the edges (approximately 1cm) as too much filling will break your pancake later. (I use about 2 Tablespoons per pancake.)

As mentioned below, leave a border of about 1-2 cm around the filling, to avoid the filling from oozing out when you row the dough later.

3. Roll the dough to form a long log- i.e. you are rolling the longer side up.

Roll the filled dough then, when it has formed a long cigar, pick up both ends and gently bounce it against the surface to help relax and stretch the dough.

4. Roll the dough into a pinwheel shape and cover the rolled dough with a teacloth or cling film. Repeat with the other balls of dough till you get 6 pinwheels.

5. Use your rolling pin or hand to gently press the (rested) pinwheel into a flat disc- these discs are what you will panfry later.

Place the cooked, golden brown pancakes on paper towels to absorb excess oil whilst you fry up the rest.

Green onion pancakes should be eaten hot and taste best with a dipping sauce on the side. They're eaten both as a snack and for breakfast in Asia, usually with a cup of soya milk.

Cut up parchment paper into pieces large enough to cover each pancake. Make sure there is 1 piece of parchment paper (or reusable beeswax paper) in between each pancake before refrigerating (in an air tight container for 1-2 days) or freezing, to prevent them from sticking to each other. (You can also use plastic wrap to separate the pieces. If you have tons of Ziplock bags, you can store the pancakes individually in the bags. (Don't forget to wash and reuse the bags to cut down on plastic waste!))

Frozen pancakes can be cooked directly without thawing- just add a few more minutes to make sure it's cooked through.

If you've cooked 1 too many, you can keep them in the fridge for 1-2 days and freezer- just reheat the homemade scallion pancakes before you want to eat them in an air fryer, toaster oven, and oven at 350 F/ 176.7 C for 8-15 minutes

Are scallion pancakes good for you?

Homemade ones are of course healthier than the ones you have in restaurants or on the street but at the end of the day, the dish is quite carb heavy and semi-fried, so consume with moderation. 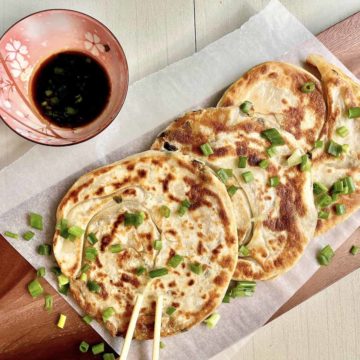 Pancake: for the filling

For the dipping sauce

To make the spring onion filling

To roll the pancakes

To make the dipping sauce

Note: serving size is based on the assumption that everyone eats 1.5 pancakes. (This recipe makes 6 pancakes, and 1 is pretty filling already!) Shortcut: if you're pressed for time, instead of making the filling and dough separately, simply mix the spring onions into the dough then make the pancakes as per the instructions above, making sure to brush the dough with the lard/ oil before rolling into a log. If you have leftover dipping sauce, it can be stored for 1-2 days in the fridge. See post for how to store and freeze these savoury Asian crepes.
Tried this Recipe? Tag me Today!Mention @GreedyGirlGourmet or tag #greedygirlgourmet!

Before you go, you may also be interested in these delicious Chinese recipes: