What does your hotteok premix contain?

You will also need the following which is not included in the box mix:

Why use hotteok box mix instead of making it from scratch?

Box mixes usually contain a ton of chemicals and preservatives so I prefer making things the old-fashioned way if I can. However, after trying the hotteok box mix, I can recommend using the box mix when:

How to make your box-mix hotteok healthier and tastier?

I like to use the hotteok box mix dough with my own filling. The box mix filling is primarily sugar with very little nuts. When you make your own filling, you can increase the proportion of nuts to make it less unhealthy and more satisfying! The filling is usually a combination of brown sugar, cinnamon and chopped up nuts – play around with walnuts, peanuts, sunflower seeds etc to see what you like best!

Note: you can also mix it up using savoury fillings such as kimchi and cheese.

Tips for making hotteok with a box mix

You’d think making anything from a box mix would be idiot-proof but I find it still benefits from some pre-planning, especially if you’ve never worked with bread dough before. (Hotteok is basically like fried bread, with a syrup filling inside!)

I know cooks always stress the importance of mise-en-place but I tend to be a cook on the fly kind of person. However, as you’ll be oiling your hands to make hotteok (if not the dough will stick terribly to your hands), it’s best to put everything you need in bowls so that you don’t get grease all over the kitchen. So, before you do anything else:

Even if you think you’ve oiled them enough, oil some more! Too little oil and the dough sticks like crazy, making shaping the hotteok a pain! Frankly, sticky hands are the reason why there was a 2 year gap between my 1st and 2nd times making hotteok 😛 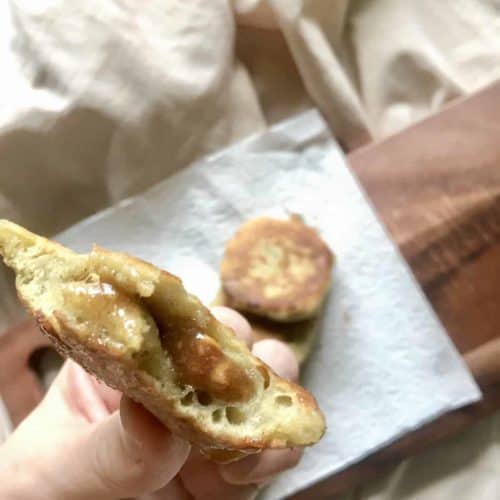 How to make hotteok using a box mix

The hotteok tastes best when consumed hot right after making. (Be careful that the syrup inside doesn’t burn you though!) If not, either finish them within 24 hours (refrigerate and microwave for 30 seconds/ heat up in a pan before eating) or freeze them for later consumption.    Note: cook the hotteok on low-medium heat and not high because if you use the latter, the hotteoks will brown very quickly but the inside won’t be cooked and it’s rather unpleasant to eat uncooked bread dough!
Keyword Korean, pancake, vegetarian

If you’re a fan of Korean food, do check out this post on fermenting maesil-cheong (Korean plum syrup) at home!

Previous Post: « 7 ways to cook with Pandan
Next Post: How to make makgeolli at home with a kit (Korean rice wine) »

My blog (updated weekly) is all about bold flavours, bringing South East Asian condiments into your everyday cooking and experimenting in the kitchen to find the ultimate recipe for classic Asian dishes. Read more →