The easiest alcohol you can make- an easy Korean plum wine recipe that only requires 2-3 ingredients & a few minutes. Maesil-ju, which is very similar to umeshu (Japanese plum wine) and Mei Jiu (Chinese plum wine), can be drunk on its own both hot and cold, or made into cocktails.

What is plum wine?

Plum wine is also known as 梅酒 (Mei jiu), maesil-ju (Korean plum wine) and umeshu (Japanese plum (Ume) wine (Shu).) The name is altogether misleading as the fruit used isn't really what we know as plums and it's not really a wine, strictly speaking.

Korean and Japanese plum wine are both made with unripe green Japanese plums/ green Korean plums, and not the regular purple-red ones we find in the supermarkets. These green Asian plums are a specialty product and you'll need to head to a Korean or Japanese grocery store to get them. (They're also sold online, when in season.)

Instead, it's made by covering green plums with sugar and steeping in a distilled alcohol, usually shochu or soju. (I used vodka as this was pre-sanctions. More on the preparation below)

If you enjoy making your own alcohol, you may want to give makgeolli, or Korean rice wine, a go- it is super easy too.

There is more than 1 way to skin a horse or, in this instance, make Asian plum wine. In the recipe card below, I've shared 2 ways to make plum wine. The 1st way produces Japanese plum wine after a minimum of 3 months whilst the 2nd gives you both plum syrup (also known as Korean maesil-cheong) AND plum wine.

Note: The 2 are quite similar so I thought I might as well put both in this post and let you choose you preferred option.

You basically cover the green plums with sugar AND alcohol of at least 35% ABV. (More details in the recipe card below.) However, if you like to make the most of your food, try the 2nd method which gives you plum syrup AND plum wine.

Note: if you're interested in Korean fruit syrups (cheong), try this tangerine-cheong.

Method 2: 2-in-1 where you make plum wine after making maesil-cheong

After your maesil-cheong is ready, strain out the syrup (and store the plum extract in the fridge.) Leave the now slightly shrivelled plums in the same jar and cover them with soju, or whatever alcohol you've chosen to use.

Store in a cool dark area till ready to be drunk. Leave it for 3 months then strain out the maesil-ju and store it in the fridge. Don't toss the pickles as they can still be eaten! (Ideas below)

You can drink your homemade plum wine:

It goes really well with dishes such as Peking duck!

If your jar was disinfected properly, your plums cleaned thoroughly and no moisture enters the jar, your plum wine can last for years in a cool and dark place, away from sunlight.

Note: some say the wine will become bitter and cloudy if the plums are left in it for over 1 year.

It is a little bit sweet and a little bit tart. The flavour is reminiscent of vermouth or other fortified wines, so some people classify it as a dessert wine.

Can you eat the plums in your umeshu plum wine?

Yes! I have a few ideas in my post on what to do with these "leftovers"!

How long can plum wine be kept?

Store bought plum wine should be refrigerated and consumed within 6 (carton) -12 months (bottled). Homemade plum wine, however, can be kept for a very long time if stored properly- in fact, it is common in Japan for parents to make plum wine when their child is born and to only drink it after the kid turns 20! 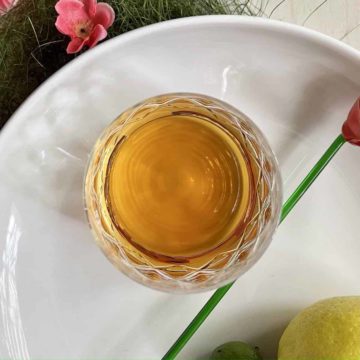 Method 2: making maesil-ju after your maesil cheong is ready

If you have a sweet tooth, you canadd more sugar (around 1.5 lbs). I hate to be a bore, but again remember to make sure the jar and plums are dry, as moisture will make the wine spoil and you won't want that to happen after waiting so long! Note: if you don't serve all the plums with your homemade plum wine cocktail, or if you decide to strain them all out after you feel the plum wine is ready, don't toss the fruits away. They are shrivelled but can still be eaten! See the post for suggestions on what to do with the remaining plums.   The longer you leave your plum wine, the better it tastes!
Tried this Recipe? Tag me Today!Mention @GreedyGirlGourmet or tag #greedygirlgourmet!