A no-caffeine tea with a nutty flavor, roasted Korean barley tea (boricha/ mugicha/ damaicha) needs only 2 ingredients. This refreshing drink can be drunk hot or cold- iced boricha is the perfect summer drink!

What is Korean barley tea?

It's a tea made from roasted barley (boricha 보리차) found all over South Korea and often served at casual restaurants. A very similar drink is found in other East Asian countries: in China, it's called DaMaiCha (大麦茶) and in Japan, Mugicha (麦茶.) Chilled barley tea is a must-have popular drink in the hot summer!

You can buy this barley drink in 2 forms: unhulled barley (whole grain) or pre-ground into powder (packed in a tea bag). However, it's really easy (and cheaper) to roast the barley yourself and goes really well with Korean foods such as this Gimbap Sandwich!

The naturally caffeine free Korean barley tea has a nutty toasted flavour. It's usually delicious and goes very well with Korean food. However, when overly concentrated can be a little sour and bitter.

The higher a ratio of roasted barley to water you use, or the browner your grains (i.e. the longer they've been toasted), the more concentrated the flavour will be.

I totally miscalculated the 1st time I made this at home 12 years ago- thanks to a blog post that told me to use ⅓C of roasted grains (WAY too much.) The pearl barley tea was super strong and reminded me of coffee!

Tip: If your tea is too concentrated, it's easy to dilute it- just add more water.

Barley tea is said to have a lot of nutritional value. Unfortunately, not much research has been done on this. However, it is likely that drinking the tea will have some of the positive effects on healthy ageing that eating barley does.

Side effects: Barley tea contains trace amounts of acrylamide, a potentially cancer-causing anti-nutrient. However, research has not produced conclusive results.

Note: Other Asian teas that have no caffeine include jujube tea, longan red date tea, osmanthus tea and plum tea.

Note: I am not a qualified medical professional and this is not meant as diet/ health/ medical advice!

You only need barley and water for this recipe! The barley can come in the form of tea bags, store-bought roasted barley grains or home-roasted barley.

Depending on whether the kernel is hulled or unhulled, in powder or whole form etc, the concentration will differ. Thus, you'll need to adjust the simmering/ steeping time accordingly. Generally:

5. Allow the extra barley to cool then store it in an air-tight container.

Note: Don't get me wrong. I love my heavy-bottomed Le Creuset and lugged it back from London to Singapore. However, testament to the quality and thickness of the pan, it took me over 1 hour to toast barley kernels using it!

4. "Wash" the tea: Pour hot water over the tea bag/ roasted grains, then throw the water away- this is to "wash the tea" and get rid of any dust and dirt on the grains.

5a. To make hot brew barley tea: Bring 1 litre of water to a boil then pour it over the same tea bag/ grains from Step 4. Allow to simmer for 10-20 minutes, depending on how strong you want the taste to be.

Remove the tea bag, or strain/ sieve out the grains. Cool the tea then store it in the chiller.

Tip: If you've made the tea too strong, just add more water to dilute it!

5b. To make cold brew barley tea: Steep the tea bag/ toasted barley grains in room temperature water then leave it in the fridge. It will need at least a few hours, but ideally leave overnight.

If you're using this cold brew method and want a very strong flavour, you'll need more kernels as there's no heat to bring the flavour out of the toasted grains.

Iced damaicha/ boricha/ mugicha is particularly refreshing on hot summer days (so everyday in Singapore, really!) It's best to make a large jar of boricha/ mugicha and store it in the fridge for the day.

Note: barley goes bad easily so I don't recommend keeping it for more than 1-2 days.

6. To sweeten or not: Traditionally, Korean boricha is not sweetened.

However, recently people have taken to adding other ingredients such as milk, sugar and even tapioca pearls to make barley milk tea.

Your home toasted barley kernels can be kept in an air-tight container (after they've cooled) and kept in the fridge for 2-3 weeks.

Korean barley tea (the liquid) goes bad so keep it in the refrigerator too- I try to finish mine within 24hours.

Tip #1: Dry fry the barley grains without any oil. You don't want an oily tea!

Tip #2: The easiest way to make this drink is to directly add the toasted kernels into your kettle. Bring the water to the boil, let it steep and, voila, you get roasted barley tea!

Tip #3: If you're making iced barley tea using the hot brew method, cool down the hot tea by placing the pot in a basin of ice. This is important when it's hot as barley can go bad quickly.

Tip #4: You only need 2 ingredients- water and barley- for this caffeine-free beverage. However, you can jazz it up with honey and lemon. If you don't have time to roast the pearl barley, you can boil it with water and (optional) pandan leaves to make barley water. (This South East Asia also comes with lemon and is believed to be very cooling.)

Tip #5: After making your tea, don't throw the grains away. They can be eaten! (Just make sure your grains have been sufficiently toasted so they're cooked.) Add them to the rice cooker, your pot of porridge, tossed into salads bakes, stews, yoghurt or cereal.

If you're into living more sustainably, here's a link to more recipes which use other kitchen scraps and leftovers.

Barley can help fight over 20 chronic diseases and has a lot of antioxidants. Bottled tea may contain sugar or other preservatives and additives, but homemade is good for you. For more about the benefits, read the section "Health Benefits" in this post!

Unfortunately, barley is not gluten-free so it's not suitable if you have celiac disease. If you are looking for a gluten-free tea for summer, try this lychee tea or this creamy matcha pineapple tea.

How many calories does boricha barley tea have?

Roasted Korean barley tea has negligible calories- there are only trace amounts of calories per cup!

Are boricha and mugicha teas?

If we're going to be super specific, they're actually tisanes made from steeping roasted barley grains. ("Real" teas are made from tea leaves i.e. the leaves of Camellia sinensis.) However, in Asia, everyone refers to boricha and mugicha as barley tea!

Enjoyed this boricha/ mugicha recipe? Please leave a 5-star 🌟🌟🌟🌟🌟rating in the recipe card below & if you REALLY liked this popular beverage, a comment would make my week! Thank you and have a great day! 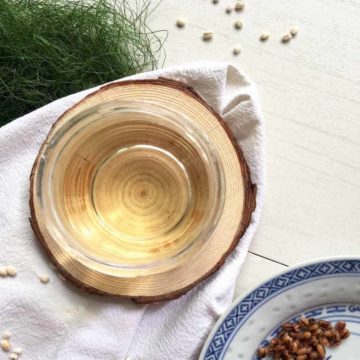 Warning: The barley grains and pan get very hot so be careful! Note: the serving size is for the drink and not toasting your own grains! As this tea can't be kept for very long, I've given quantities to make 1 litre only. If you want more, just multiply the ingredients accordingly. Optional, non-traditional variations Sweet barley tea: stir in some honey or sugar. You can also add roasted corn kernels for a naturally sweet toaste With a twist: adding a squeeze of lemon and sugar is delicious Barley milk tea: Add some milk and sugar and (optional) cooked tapioca pearls for bubble tea Cold brew: steep the grains/ tea bag in room temperature water for a few hours- overnight Note: the nutritional information is an estimate automatically calculated using the WPRM recipe maker and I am not responsible for its veracity.

If you've enjoyed this Korean barley tea recipe, do let me know on social media or in the comments!