One of the most popular non-caffeinated Chinese teas, Pure Golden Osmanthus Tea (or 桂花茶 Gui Hua Cha) was part of the Chinese imperial palace's diet dating back to the Tang dynasty! If you want to drink what the royals drank, I've included 3 different versions of this fragrant tea below.

Originally from China, Indochina and South Japan, the flower is a classic Chinese fragrance dating back to the Tang Dynasty where it was used to brew pure tea and desserts such as osmanthus tea konnyaku jelly

You can even use it to make a flavoured osmanthus sugar to sweeten your tea and foods!

The dried golden flowers have rich aromas, similar to a very ripe peach or apricot. If you smell it, it's almost like honey!

The flavor when ingested, in contrast, is quite delicate and floral. It obviously tastes good to Chinese people, having been part of the cuisine for some long, but may be an acquired taste for those not used to floral flavours or the lighter taste of Asian desserts.

Note: Asian desserts, such as the chewy texture of mochi, can be love-it-or-hate-it!

Fresh Osmanthus flowers bloom from late summer to autumn. It thus has strong associations with the Chinese Harvest Festival or Mid-Autumn Festival, which falls on the 15th day of the 8th month in the lunar calendar.

Thus, we have several Mid-Autumn recipes which feature Osmanthus, such as glutinous rice tang yuan, osmanthus wine and even jam.

Fresh osmamthus flowers are so entrenched in Chinese culture that they are even part of a Chinese idiom 吳剛伐桂 (wu gang dai gui.) This phrase symbolises endless toil. (It references the Chinese myth in which a man, Wu Gang, has to chop down a regenerating osmanthus tree on the Moon. Sort of like a Chinese Sisyphus!

There are a few versions of the story, so I won't bore you but if you're interested, you can check out wikipedia.)

Note: this is just for your information and is not meant as medical, dietary or health advice, which I'm not qualified to give! Please check with the appropriate professionals if you have any questions or concerns about the benefits of osmanthus.

Some parts of TCM can be controversial so I only include it in my posts when there are authoritative sources, such as the local Singaporean Newspaper or scientific reports.

Osmanthus flower tea and cake were popular with the Chinese royalty, as the flower is believed to be very good for you (according to Traditional Chinese Medicine (TCM).)

You only need 2 ingredients to make this golden tea:

However, if you like your food on the sweeter side, you can add a little neutral-flavored honey. (Osmanthus floral tea can be a bit bitter when concentrated.)

Note: A shortcut to making a sweetened version is to add hot water to osmanthus sugar or osmanthus syrup (which is basically the dried fragrant flowers + honey)

You can also blend the osmanthus tea with other tea leaves, to create:

However, even in a country with as large a Chinese population as Singapore, it is still considered a bit of a speciality product. Hence, it may be out of stock in generic grocery stores.

In the United States, Chinese medicine stores are your best bet as they usually keep ready stock as well as bring in better quality osmanthus flowers. (These will have fewer impurities such as branches amongst the Dried Golden Osmanthus Blossoms)

If not, you can always find osmanthus flower tea online!

Note: You may think that they're all the same, but they're not! When my friend made osmanthus jelly using dried flowers she'd bought from a neighbourhood shop, she said they didn't taste as good as mine, which was made with osmanthus from a TCM shop (even though we used the same super easy osmanthus jelly recipe)!

3. Pour some hot but not boiling water over the flowers and swish it around.

Note: I don't recommend washing the osmanthus flowers in a regular strainer as they're very small and will end up sticking to the strainer.

4. Immediately pour out the water. (This is the 1st rinse of the tea which is usually not drunk by Chinese people.)

Let the tea steep for 2-3 minutes or to taste. Enjoy with some osmanthus cake on the side.

Optional: you can strain out the flowers if you want but they're edible.

These golden flowers get moist easily so make sure to keep them airtight containers. (Toss in 1 of the dehumidifying food-grade packs, if you have them.)

It's generally recommended to use any osmanthus tea you have within 1 year but I confess I don't always do that. (Best before dates are guides not hard and fast rules, after all.)

Do toss if you notice it's moist or if you see any mold!

Tip #1: Traditionally, osmanthus comes loose as dried golden flowers, and not in a tea bag. Some upmarket tea companies are starting to sell it in tea bag form but I don't recommend those as they're more expensive and bad for the environment.

Tip #2: The golden blossoms are so pretty floating in the water- add a couple of golden flowers back to the cup for visual effect!

Tip #3: Use a clear glass cup (which can withstand heat) to best admire the blossoms!

When should I drink osmanthus tea?

As there is no caffeine, you can drink pure osmamthus tea anytime! (Make sure it's not blended with other caffeinated teas.) There have been reports linking 1 daily cup of osmanthus tea with increased anti-oxidant defenses. (But everything in moderation, remember!)

Can the osmanthus flower be eaten?

There are several ornamental varieties. However, the species used in cooking and to make tea can be eaten. However, it can be a bit fibrous so I suggest no more than a couple of buds per cup!

Enjoyed this Healthy Osmanthus Tea recipe? Please leave a 5-star 🌟🌟🌟🌟🌟rating in the recipe card below & if you REALLY like it, I'd love a comment. Thank you! 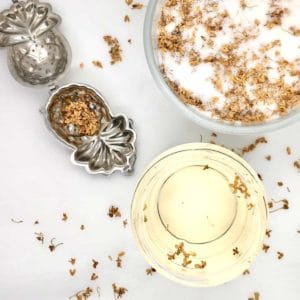 Note that overly concentrated osmanthus- either by using too much dried flowers to water, or by steeping for too long- can lead to a bitter flavour. Don't toss it out if you've made this rookie mistake- simply add a bit of sweetener! Storage These golden flowers get moist easily so make sure to keep them airtight containers. (Toss in 1 of the dehumidifying food-grade packs, if you have them.) It's generally recommended to use any osmanthus tea you have within 1 year but I confess I don't always do that. (Best before dates are guides not hard and fast rules, after all.) Do toss if you notice it's moist or if you see any mold! Note: the nutritional information is an estimate automatically calculated using the WPRM recipe maker and I am not responsible for its veracity. The values for dried osmanthus are taken from Myfitnesspal.com

What are some of your favourite tea flavours? Don't forget to tag me on social media (@greedygirlgourmet) if you try this Chinese Gui Hua Cha recipe!