An ancient Chinese drink that is still popular today, Dried Chinese Sour Plum Drink (SuanMeiTang) is very refreshing and great for digestion! As some of the ingredients can be difficult to find outside of an Asian Traditional Chinese Medicine Shop, I've boiled this Sour Plum Tea down to an easy, 3-ingredient version!

It is a whole burst of flavours, predominantly sweet and sour, with salty and some smokey undertones! Due to its refreshing and cooling nature, suanmeitang is usually chilled and drunk on hot days as iced plum tea. (We call it tea but it's not literally one!)

Chinese plum tea is also drunk after eating hot pot or other strong flavoured foods! (Sour plums are considered by Chinese people to be good for digestion.)

This beverage is so popular amongst the Chinese that there have even been sour plum beers brewed. (Singapore's Tiger Beer has their own version of sour plum and calamansi alcohol, inspired by the popular Assam Boi lime juice drink.)

Note: this suanmei drink is not to be confused with the Assam Boi Calamansi Lime Juice that is popular in Singapore and Malaysia.

Chinese Sour Plum Tea is similar but not the same as Korean plum tea (maesil-cha.) Both are perfect drunk with ice on hot summer days.

However, this is easier to make as the Chinese preserved plums used are easier to find than Korean plum syrup. (You have to make it yourself in May-July (recipe in the link), or buy the commercial version from a Korean supermarket.)

Suanmeitang is traditionally believed to be cooling (helps reduce the body's heatiness) and good for digestion, but I always like to reference my health claims with research journals, so I'll update this section as I find more info.

Note: this isn't meant as medical or nutritional advice but as trivia info only.

Some sites claim so but keep in mind that Chinese preserved plums are made with a ton of sugar. I love these salty, sweet and sour treats and drinks, but it's best not to overindulge!

There are 5 main ingredients of suanmeitang but you really only need 3:

Personally, I find the most basic suanmeitang only requires 3 ingredients: wumei (key ingredient!), Chinese hawthorn (for tartness) and a sweetener.

As for the other ingredients, I include them when I have them and skip when I don't. The flavour they add to the drink is more subtle and you still get a thirst-quenching, delicious drink without them.

Note: according to Wikipedia, Gancao can have side effects, especially for pregnant women so, if in doubt, leave the gan cao out of this suanmeitang recipe and always consult your doctor first!

Trivia: if you watch Chinese historical dramas, the female lead always ends up buying a street snack called "bing tang hu lu" which is like a kebab but with shiny red balls. Those sweet and sour treats are made from Chinese hawthorn, a key ingredient in this recipe!

Unfortunately, Chinese hawthorn is not currently available at mainstream supermarkets like Trader's Joe or Wholefoods at the market. You may be able to get it on Amazon or Asian supermarket but your best bet is Chinese TCM shop. (The same goes for Chinese licorice, tangerine peel and osmanthus tea.)

Chinese suan mei, thankfully, are easier to find and should be available at most Chinese supermarkets.

There are many varieties of Chinese sour plums, from wumei to jiayingzi and huamei, which all taste slightly different. They're all made from plums, salt and sugar/ honey, and some may have other ingredients to the preservation such as licorice, cloves, tangerine peel.

It is the hero of this Chinese suanmeitang drink: black in color, it usually has more, softer flesh. The taste is not as strong as huamei and there are some smokey undertones. It's typically consumed in Chinese plum tea and not so much as a candy.

Note: Koreans and Japanese have similar preserved plums made from maesil and ume respectively.

It is very dried and speckled with white powder and looks like a mummified wumei. Made from green plums, it has a licorice flavour.

The saltiness and astringency makes your mouth water and your lips pucker, mimicking this preserved fruit's puckered appearance! It's good as an appetiser to wake up your taste buds or as a snack. In Singapore and Malaysia, huamei is used to make a very refreshing drink with lime juice (Assam Boi Lime Juice).

I used to eat huamei in place of candy as a child, after meals to help digest my food or whenever I got 1 of my infamous bouts of car sickness. Some women use it to help pregnancy nausea but note this is not medical or nutritional advice (in fact, some people say to avoid these preserved plum if pregnant so please always check with a medical doctor first!)

It's used to make plum sauce, and is a great meat marinade (together with ginger, sugar, soy sauce and chilli if you like spice. For a sour plum pork trotter recipe, click the link.) In Hawaii, they even use li ming hui powder on gummies!

Traditionally, Chinese people preserved fruit by boiling in honey. Today, to cut costs, many factories use sugar. If possible, try to find organic wu mei with honey listed in its ingredients, as that's healthier.

Always buy from a reputable brand as, in 2012, the US recalled some suanmei brands due to the presence of lead.

Note: if you're buying pre-made sour plum drinks, check to see if it's made from the dried ingredients or sour plum paste and flavourings. (Obviously, the former is better but the latter usually cheaper!)

1a. Rinse the hawthorn, add to the pot with the water and Chinese plums. Bring to the boil

1b. Reduce fire to medium (i use 5.5 on a Bosch induction stove which has a max of 9) so that the liquid is simmering. (You will see a few small bubbles.) Leave to simmer uncovered for 40 minutes.

2a. At the 30 min mark, taste and see if the tartness is to your liking. If yes, add the sugar and stir till dissolved. I used homemade osmanthus sugar which is why you see all the yellow flowers, but regular white sugar works too.

2b. If not, leave till 40 min and taste again. Repeat till you like the taste then add the sugar.

Note: if you're using rock sugar, it comes in clumps, so you may have to increase the fire to help it dissolve into the plum tea. Also, the flavour changes after chilling/ adding ice and thus requires different amounts of sugar. To me, suan mei tang tastes tarter cold.

For hot sour plum juice: sieve out the ingredients and portion out the tea then sprinkle some osmanthus flowers. Add a new Chinese black plum to each cup (optional).

For cold plum drink: allow it to cool down with the ingredients steeping inside (this took me about 40 minutes) then sieve and pour the juice into a glass jar which goes into the fridge.

Suanmeitang will go bad in the heat so, after cooling, keep it in the fridge for no more than 2-3 days. If the colour of the juice becomes cloudy/ opaque- toss it!

The taste changes after chilling: the cold somehow brings the flavours more into focus. I find it becomes a bit more tart and a bit less sweet.Depending on whether you're making a hot or cold plum drink, the amount of sugar used will vary!

Tip #1: You can cook suanmeitang in a slow cooker or pressure cooker if you want to reduce the cooking time

Tip #3: After straining out the ingredients, they can still be eaten but they'll taste mushy (the plum almost expands back to being a regular plum but sometimes it breaks down. You may need to sieve it out for a clear drink. )Alternatively, you could blend the leftovers and turn into puree or jam.

When was Suan Mei Tang invented?

Suanmeitang has been around for over 1000 years (dating to the Song Dyansty) and was commonplace in the imperial courts during the Qing Dyanasty. It was so popular that it started being mass produced in Chinese factories from the 80s. As we all know, making food at home is always better than buying factory-made, as the latter adds preservatives and what not. This sour plum "tea" is also very easy to brew, so why not learn to make it yourself?

There is no caffeine in this recipe or in traditional Chinese preserved plum tea. (It's more a tisane than a tea?) Other Asian caffeine-free teas include Korean plum tea (which is a pure plum tea), roasted barley tea, red date longan tea, jujube tea, goji berry tea, lemongrass ginger tea and osmanthus tea

Are plums special to the Chinese?

Plums are a huge part of Chinese culture and history. Plums can represent many things to the Chinese, from perseverance (the flowers bloom in the harsh winter), to renewal (they're the 1st flowers seen in the year) and success (thanks to their 5 petals 5 being a good number to the Chinese).
In history, during the era of the 3 Kingdoms (AD 220-280), Cao Cao, a very famous and important figure in Chinese history, led his army under the burning sun with little water. To raise the soldier's morale, he told them about a plum tree grove ahead, which motivated them to continue forward. This led to the Chinese proverb 望梅止渴 (wang mei zhi ke, literally looking at plums quenching thirst) which means consoling oneself with false illusions.

Enjoyed this Chinese Plum Tea Recipe? Please leave a 5-star 🌟🌟🌟🌟🌟rating in the recipe card below! If you REALLY liked this preserved plum drink, please consider supporting it by buying me a coffee! 🙂 (No obligation though!) Thank you and have a great day 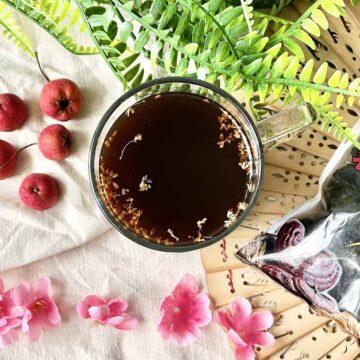 Some recipes soak the ingredients first (it's said to reduce the smoky flavour but I don't find the smoky taste overpowering). I skip this but if you choose to do so, don't throw away the soaking water (or you'll be throwing out a lot of flavour). Rinse the ingredients, soak them then bring the ingredients to boil in the soaking water. I use the ingredients (excluding water) in a 1:1:1 ratio (i.e. the ingredients are all of equal weight) but have included cup measurements above to make things easier. If you prefer a more mouth-puckering drink, increase the Chinese hawthorn. Obviously, for something sweeter, add more sweetener. (If you need a recipe for osmanthus sugar, here's the link.) The simmering time is just a guide- I've used less time (30 min) and the tea tasted good but I prefer it stronger at 40 minutes. If you like the flavour even more in your face, increase the cooking time (or the ratio of ingredients to water)- you can even put this in a slow cooker, which is what a lot of street stalls which sell the drink do.
Tried this Recipe? Tag me Today!Mention @GreedyGirlGourmet or tag #greedygirlgourmet!

If you enjoyed this Chinese plum tea, maybe you'd like to sign up for my Asian food newsletter?