An easy & healthy Turmeric Ginger Cinnamon Lemon Honey Tea that only requires 5 ingredients. It is not only delicious, it's a treat for the eyes with its beautiful, naturally golden color!

Note: For more turmeric recipes, such as turmeric with roast potatoes, click here, or here for turmeric substitutes.

A warm cup of lemon ginger turmeric tea is the perfect anti-inflammatory drink in winter. (All of the ingredients in this turmeric ginger cinnamon tea have been chosen for their positive impact on the immune system.)

Side effects: These spices may react negatively with certain medications, such as warfarin, so always consult a medical doctor first.

Some people have also suffered from diarrhoea, heartburn etc after taking too much of this herbal tea, so everything in moderation!

Turmeric is a rhizome containing curcumin and thus is often extolled for its health benefits- it is used in Ayurvedic & Traditional Chinese Medicine and is a very common ingredient in Asian & Indian kitchens. In India, turmeric was a medicinal herb used for joint, respiratory, digestive and skin problems.

Curcumin has good anti-inflammatory properties and is a potential treatment for osteoporosis & other illnesses.

However, not much concrete evidence of the benefits of turmeric is available as its curcumin content is very unstable. (1 study claims that taking turmeric 3x a day is comparable to a daily 1200 mg dose of ibuprofen, but more research is necessary to confirm this.)

Ginger (Zingiber officinale), which has a bold, almost spicy flavour, has a lot of powerful anti-oxidant plant compounds. Its many bioactive compounds include lot of anti-inflammatory gingerols. Ginger is used in many cold, nausea and arthritis treatments.

A study of people with rheumatoid arthritis found that daily ginger powder over a period of 12 weeks helped to improve inflammation. Another 2019 Supportive Care in Cancer study found that taking ginger every day improved gastro-intestinal symptoms of advanced cancer patients.

Fun fact: ginger in animal studies has even been shown to boost testosterone!

Cinnamon has been used since 2800BC, and is a traditional remedy for respiratory and digestive illnesses. There are 4 types of cinnamon:

Ceylon cinnamon is expensive but should be used whenever possible due to its low coumarin. Be careful of using too much Cassia cinnamon, which contains high amounts of coumarin, a carcinogenic substance that can harm your liver and is toxic in large doses.

Cinnamon contains phytochemicals which help brains better utilize glucose. It also has anti-microbial elements and can limit the growth of Listeria, Escherichia coli & other bacteria in food. There are also many other cinnamon studies, researching its effect on:

Note: all this information is FYI only and not meant as medical or health advice. Please consult a qualified health or medical professional for advice.

A squeeze of lemon juice not just makes the tea taste better, it also boosts the vitamin C content: 1 lemon has 31 mg of Vitamin C, an anti-oxidant that protects your cells from free radical damage, which is why warm lemon water is so good for you when you have a sore throat.

You could also try it with calamansi, another citrus fruit that has a delicious floral taste.

Tip: Serve each mug of tea with a slice of lemon on the side for visual effect.

A touch of honey helps to counter the sourness of the lemon juice. Manuka honey is 1 of the healthiest types of honey after which come dark unfiltered honeys. Stay away from clear filtered honeys- some have had unhealthy high-fructose corn syrup added to them!

Made in New Zealand and Australia by bees that pollinate the Manuka bush, according to nutritionist David Friedman:
“Manuka honey has antiviral, antifungal, antibacterial, anti-inflammatory and antioxidant benefits. It’s an effective treatment for stomach ulcers... It’s also been found to be effective against chronic diarrhea and C. difficile, a bacterium that can cause life-threatening inflammation of the colon... it destroys "harmful oral bacteria associated with plaque formation and tooth decay.”

Tip: Raw honey is preferred for its health benefits but, if vegan, you can use bone char free brown sugar or a sweetener of your choice.

To make this turmeric cinnamon ginger lemon honey tea, you will need:

For a full list of ingredients, please check out the recipe card.

Cinnamon, ginger, lemon and honey are all readily available in most super markets.

For fresh turmeric, you will probably need to go to a shop like Whole Foods- alternatively, you can make do with ground turmeric, which can be found in most grocery stores.

Click here to get Manuka Honey on Amazon (affiliate link at no cost to you.)

Note: always check the cinnamon is Ceylon cinnamon- even the McCormicks ground cinnamon on your spice rack is Cassia, not Ceylon!

3. Add the ginger, cinnamon, turmeric and water to a pot. Bring to a boil then reduce to a simmer for 10 minutes, or to taste.

4. Once the flavor is strong enough, switch off the fire and stir in the lemon juice.

5. Then stir in the honey, to taste. Preferably use Manuka honey for the most health benefits, if your budget allows.

Pour into cups and serve.

Tip #1: I used fresh turmeric ginger in my recipe but if you live outside of Asia, fresh turmeric may not be easy to get so feel free to use powdered ginger and turmeric if necessary.

Keep in an airtight container in the fridge for up to 2 days.

How to distinguish Ceylon cinnamon and Cassia Cinnamon?

Yes but they're very hard so you will need to grind them into a fine powder first, as is done in this 5-spice powder recipe. Alternatively, you can simmer the whole sticks to infuse the flavor into your dish or use the stick to stir your drinks.

Ginger has a lot of antioxidants and small amounts may help gastrointestinal irritation. It can reduce the likelihood of food flowing back up the oesophagus and thus acid reflux. However, everyone has different reflux triggers, so do consult a medical professional and take note of your reaction after eating ginger to be sure.

Enjoyed this turmeric tea recipe? Please leave a 5-star 🌟🌟🌟🌟🌟rating in the recipe card below & if you REALLY liked this healthy drink, a comment would make my week! Thank you and have a great day! 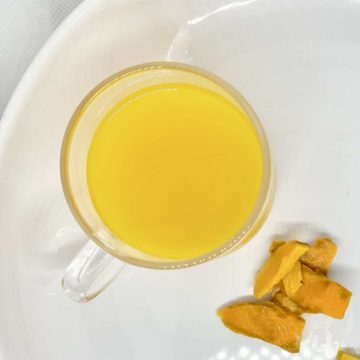 The easiest way to peel turmeric and ginger that wastes the least is using the back of a spoon. For more ideas on how to use turmeric, click here. For a stronger ginger tea, use grated ginger. Chinese cinnamon, or cassia, is sometimes labelled as cinnamon. Make sure you've got the real cinnamon to get the full health benefits of this tea! Variations Note: the nutritional information is an estimate automatically calculated using the WPRM recipe maker and I am not responsible for its veracity.

Let me know if you've made this turmeric ginger tea by tagging me on social media (@greedygirlgourmet)! Alternatively, sign up for my newsletter here for more easy Asian recipes!