This easy vegan wonton soup for colds is done in 20 minutes and tastes so authentic that I wouldn't know it was vegan if I hadn't made it myself! Packed with garlic and ginger, it's a quick and simple flu-busting recipe.

Who wants to spend 30 minutes standing over the stove when it's hot out, they're sick or making a weeknight dinner? With this quick and easy, authentic tasting, vegan wonton rice noodle soup recipe, you won't have to anymore! Have it with noodles, or serve with Chinese dumplings.

Wonton is the Cantonese pronunciation of yuntun 云吞, a type of Chinese dumpling. Although dumplings date back centuries, wontons took on a life of their on in Southern China and the 2 started to have distinct identities from the time of the Tang Dynasty.

Wontons are typically smaller than dumplings (jiaozi) with thinner skins. They're usually served in soup, although some people fry them too. Different provinces in China have different types of wontons, but this recipe focuses on the Hong Kong Cantonese style.

Trivia: in Singapore and Malaysia, dried wonton - called wanton- noodles (served with boiled and fried wontons) are more common. These are also made from thin yellow egg noodles, but tossed in a combination of dark and light soya sauce (amongst other things). The soup is served on the soup, and there's often pickled green chilli or spicy sambal sauce as well.

Whilst not classic wonton soup ingredients, you can bulk up your vegan wonton rice noodle soup with these veggies:

How to make spicy

If you like spice, you can serve this vegan Cantonese wonton noodle soup drizzled with vegan chilli crisp.

Thin rice noodles (and glass noodles) can be blanched in hot water before before adding to the soup. Don't boil them in the wonton soup, as it'll make the broth starchy and less clear.

Put the thin rice vermicelli in hot water for 5-10 minutes before adding to the wonton soup - they're ready when they've become soft and pliable.

Other Asian dishes that go very well with wonton rice noodle soup are:

What to do with leftovers

I usually make a big batch of soup broth at 1 go because it involves boiling for ages.

With this easy vegan asian wonton rice noodle soup, it only takes 20 minutes so I don't bother making in advance. (See above for tips to make larger quantities of this recipe.) However, if you have more than you need, you can store it in the fridge for 2-3 days or freeze it.

Love this Chinese wonton soup recipe? Please leave a 5-star 🌟🌟🌟🌟🌟rating in the recipe card below & if you REALLY enjoyed it, I'd love a comment. Thank you! 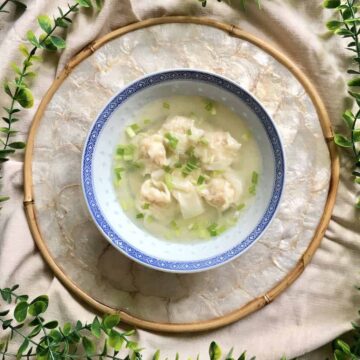 You can also cook the veggie balls (they're like Asian vegetarian meatballs) in the soup- just note that they may thicken the soup if they contain starches as well as season it as most veggie balls are salted. (In this case, cook the veggie balls first, taste, then season.)   I don't recommend cooking the dumplings or wontons directly in the soup though, as they're too starchy and the consistency of the soup won't resemble that of wonton soup anymore.   Alternatively, if you don't cook any of the above in the soup, and find the texture too watery compared to authentic wonton mee (which is a bit gelatinous due to the bone broth), use a bit of flour or cornflour to thicken it. Add 1 T of cornflour to a bowl then pour in 3-4T of the soup and mix WELL. We don't want clumping! After that, add it bit by bit to the soup, stirring and tasting after each addition- don't just dump it all in or you may get something too thick. We're not making gravy or ramen here! Note: the nutritional information is an estimate automatically calculated using the WPRM recipe maker and I am not responsible for its veracity.

If you've enjoyed this vegan wonton soup, please do give me a shoutout on social media!