This easy Chinese Pumpkin Porridge recipe is the perfect Asian comfort food for fall! It's also a great way to use up leftover pumpkin puree! Adapted from a Michelin-star Chinese restaurant's recipe to make it suitable for weekday dinners.

⭐ Why This Recipe is a Star

Note: Other comforting fall recipes include this warming ginger chicken soup (made with coconut water!), this leftover roast chicken porridge and this Singapore Chicken Porridge.

You will need a few simple ingredients:

For the full list of ingredients, please scroll down to the recipe card.

Note: My testers and I don't feel that coriander goes well with this pumpkin porridge so don't recommend it. If you want a garnish, try spring onions or 1 of these Chinese rice porridge toppings and side dishes.

This Chinese Pumpkin Recipe is adapted from a Shangri- La Hotel Shang Palace recipe to make it suitable for weekday dinners. (In case you're not familiar with Shangri-La, it's an Asian chain of luxury hotels. The 1 in Singapore received a Michelin-star at its Chinese restaurant!)

The pumpkin gives the rice a beautiful golden hue. It also makes it look especially appetising, as well as bulks up the poached rice, so it's healthier!

Usually people get hungry quite soon after eating rice porridge. However, the thickness of this pumpkin poached rice means that you stay full for quite some time.

This Chinese pumpkin recipe is also great for Chinese New Year as gold is considered a lucky colour. It symbolises getting lots of gold (money!) in the coming year. In fact, some people feel it's a must to have pumpkin on their CNY table, such as this easy Chinese pumpkin soup recipe.

6. When the pumpkins are cooked, they should be tender enough to pierce with a fork.

7. Lower the heat to a simmer. If using, add the fish now and poach till cooked. If not using fish, add the same quantity of soy sauce and sugar to the porridge (as per the marinade quantities.)

8. Stir in the shaoxing wine, then add your cooked white rice to the pot.

9. Salt to taste and serve.

Changes to the Original Hotel Recipe

I prefer to use natural ingredients in my cooking, so I substituted the chicken bouillon powder with sugar and light soya sauce. (Most vintage Singaporean cookbooks use MSG but my Uncle, who was Perankan and a fantastic home cook, always used sugar whenever recipes called for MSG.)

I also pared down the steps and ingredients to the basics to make it more accessible for weekday dinner cooking.

For example, the original calls for crabmeat, but crabs aren't really an everyday ingredient. I tested this Japanese pumpkin porridge without it and the chicken stock, seasoning and dried scallops make it sufficiently tasty!

You can add the crabs on special occasions as well as other types of seafood, such as fresh scallops, prawns and abalone.

Note: Alternatively, click here for a fresh and dried scallop congee and here for a canned abalone chicken broth congee.

Tip #1: If adding other types of seafood, add them to the broth with the fish (i.e. in the 2nd last stage of cooking. Put them in the pot in order of the amount of time they take to cook, starting with the longest to the shortest. This helps keep the seafood tender and not rubbery.)

Tip #2: If using fresh pumpkin, it can be steamed, boiled or microwaved for this porridge. I recommend boiling for those who want to save time, and steaming for those want a slightly more melt-in-the-mouth pumpkin texture. (The difference is quite small, to be honest.)

Tip #3: If you want a smooth porridge with no chunks of pumpkin, blend the pumpkin in the chicken broth before adding the grains of rice!

Can i use Pumpkin Puree?

Yes, if you're pressed for time, or simply want to finish up your extra pumpkin puree.

What can I do with the rest of the japanese pumpkin?

You'll probably have some pumpkin leftover if you're cooking this porridge for only 3-4 people. You can use the rest in assam fish curry or 1 of these Asian pumpkin recipes. You can also use it as natural orange food coloring in these pretty spiral mantous.

Enjoyed this hotel-inspired Chinese Pumpkin Porridge recipe? Please leave a 5-star 🌟🌟🌟🌟🌟rating in the recipe card below & if you REALLY liked this Asian comfort food dish, a comment would make my week! Thank you and have a great day! 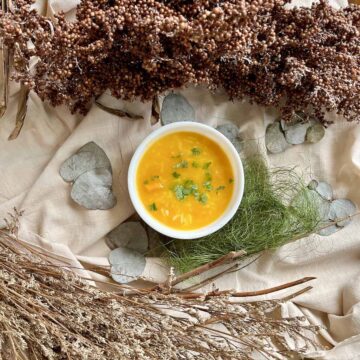 Other ways to cook pumpkin besides boiling You can also steam the pumpkin till soft then mash it up with a fork. Alternatively, you could also skip the arm workout and blitz in the blender. The fastest method is microwave the pumpkin (with a bit of water) till it becomes soft - about 5 minutes at 800W.  For a smooth porridge with no pumpkin chunks, blend the pumpkin and chicken broth before adding the fish. Variations: when I have king oyster mushrooms, I cut them into long strips and add them to the porridge. If you have too much dried scallops, use them in 1 of these Chinese scallop recipes. Note: the nutritional information is an estimate automatically calculated using the WPRM recipe maker and I am not responsible for its veracity.

If you try this easy Chinese pumpkin rice recipe, let me know what you think in the comments or tag me @greedygirlgourmet on Instagram!

If you'd like to receive more such Asian recipes for fall, sign up for my news letter here!