In the West, porridge is made with oats but in Asian countries, porridge is almost always made with rice (and maybe some other grains.) There is more than 1 type of rice porridge, such as Taiwanese porridge and Cantonese congee.

To be more specific, congee (also known as juk or jook) is a type of Chinese rice porridge or gruel, but it has a different texture. Congee is silkier than other types of porridge, which may have separate rice grains. Most commonly associated with Cantonese cuisine, congee has an almost starchy and thicker texture with the rice pretty much broken down after a long cooking period.

In fact, to congee enthusiasts, the challenge of cooking congee is how to replicate the smooth & thick consistency you get at Cantonese restaurants at home. (I will be doing 1 of my kitchen experiment posts on this subject, in which I compare and contrast the results of various famous recipes- such as what I did for Chinese New Year peanut cookies and Cantonese soy sauce chicken- to see which produces the silkiest congee.)

Chinese people can eat porridge for breakfast, lunch or dinner, and it's especially beloved when feeling under the weather, as it's light and easy on the stomach. Moreover, all of us have fond childhood memories of this dish so it's considered a comfort food. It can be a very frugal dish made with simple ingredients, or made more lavish by using rehydrated dried scallops and other seafood, as I have done

What are dried scallops?

They're not cheap though so if you'd rather not splurge, here are some good dried scallop substitutes.

They are quite hard and, like other types of dried ingredients such as dried shrimp and dried oysters, need to be rehydrated by soaking in warm water or hot water for 30-60 minutes before using. (Larger pieces need to be rehydrated for longer- some are soaked overnight.) Some people like to steam the dried scallops before using, to get them extra soft, especially if adding them to a recipe that doesn't have a long cooking time.

They're typically added for their sweetness, umami and the depth of flavour they bring to food. Dry scallop is often added to Cantonese congee and soups, such as abalone congee, pumpkin fish porridge and black silkie chicken soup. You can think of them as Chinese, natural stock cubes.

Larger scallops usually cost more than small pieces; and whole pieces are considered "better" than dried scallops that have broken down into bits. For congee, you can just buy the broken conpoy as they're cheaper and the congee calls for shredded scallops anyway.

Some people say you should avoid the ones with white specks on them, as these are a sign of old age (age spots, like humans!)

Dried scallops last for months in the fridge and even longer in the freezer.

The main ingredients of scallop porridge are relatively few:

Once you are familiar with this congee recipe with dried scallop, you can make:

In Hong Kong and Singapore, congee is often eaten with side dishes such as:

2. Don't throw away the scallop soaking liquid! These are full of the sweet & briny goodness of the sea and can be added to sauces and soups. Do give them a quick rinse before rehydrating though.

3. For fuss-free cooking, you can even get a rice cooker with a congee setting these days and dump everything in the pot, although the final result isn't as silky as the congee in Hong Kong. (You can also use a thermomix or Instant Pot, if you have 1.)

4. Use a large pot if cooking this over the stove, as the water will bubble up when boiling and may overflow if the pot is too small.

Do stir the bottom of the pot regularly, to avoid the rice grains from burning and sticking to the bottom

5. When you rinse rice, you can keep the water. The first rinse can be used to water plants, and the 2nd and 3rd rinses kept to make thicker stews and soups. (The starch will give them more body.)

Can you freeze congee?

Some people say congee can be frozen for up to 3 months but, in my household, we've always been told that we should finish all rice porridge or congee on the same day it's cooked as it's not good to keep it overnight. 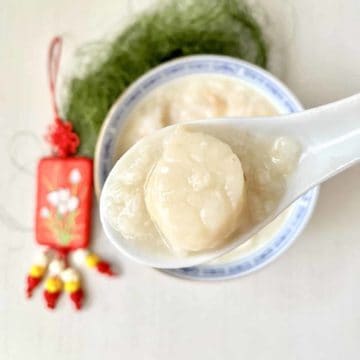 Note: add the salt at the end, not the beginning, as the congee will cook down and something that tastes just nice at first may be way too salty later. If using frozen scallops, you can add them straight into the pot without defrosting. If you decide to use canned abalone in the porridge, you can add some of the abalone brine to the congee.
Keyword congee

What is your favorite childhood congee recipe?