Chinese Black chicken (Silkie Chicken) soup recipe is a traditional soup that is delicious, nutritious AND only calls for 5 ingredients! I've made this easy Black Chicken soup recipe non-herbal, as many younger Asians find it hard to accept the strong flavours of herbal soup, but it's still very good for you!

What is black chicken?

Black chicken, also known as Silkie chicken, is often used in Chinese cooking to make soups, especially herbal ones. These are not black feathered chickens by the way- in fact, ironically, they have white, very fluffy feathers.

To be honest, every time I see a photo of them, I feel bad to eat black chicken as they look so cute and cuddly! I've never spent time with a live black chicken, but Silkie chickens are supposed to be quite mild-mannered and make good pets.

Instead of black feathers, Silkie chickens are black all the way down to their bones: the skin is pure black and the meat as well as bones a grey-dish black. (The earlobes are blue though!) Although we're not 100% sure where they originated, most ancient documents indicate China- the earliest Western record is by Marco Polo, who mentioned a "furry chicken" that he saw on his travels.

Fun fact: the name "silkie chicken" comes from the fact that the plumage is supposed to feel very silky and nice to the touch!

Note: silkie chicken is different from the Ayam cemani chicken, which is common in Indonesia.

Black chicken tends to be much smaller than regular chicken- it is more like French poussin. (They weigh 1.4-1.8 kg on average, but the American Standard of perfection prefers silkie chicken to be 900g-1kg.) They don't have much meat, so they're usually not used for chicken dishes but in Chinese soups instead. To be honest, I could probably eat an entire Silkie black chicken by myself!

Unlike regular chicken, Silkie chicken is typically not factory-farmed on an industrial scale, so most tend to be free-range (and better for your health!) As a result, although the meat still tastes very much like regular chicken, the flavour is a little more intense, which makes it perfect for stewing in soups! (Regular chicken is often so bland and tasteless because of intensive farming practices.)

Having said that, black chicken is also usually more expensive, so if you're on a budget, you may have to save it for special occasions such as Chinese New Year & Christmas.

Trivia: Silkie chicken have 5 toes whilst regular ones have 4.

Silkie chickens lay about 3 eggs a week, but the eggs are tiny! You can also use them to hatch eggs by other chicken breeds, as they're broody in nature.

Fun fact: the bird that Marco Polo described as having the best eggs sounds very much like a silkie.

As mentioned, as black chicken is usually free-range and not a product of intensive farming, it's :

Besides Chinese food, black chicken is also used in Japanese, Korean and some other Asian cuisines. In fact, in Vietnam, black chicken soup is known as " ‘ga ac tiem thuoc bac’ or evil chicken of Chinese medicine! I assure you, this soup tastes good and not like medicine at all!

I've never seen black chicken in a mainstream supermarket outside of Asia, but you could probably find it in an Asian market- try to go to a Chinese grocery store if you can.

Why make this recipe?

Note: including the 1 bowl of water I add at the end, I use a total of 12 bowls of water to 1 small black Silkie chicken.

For more Asian recipes which can be made with 5 ingredients (or fewer), click this link.

Keep any leftover soup in an airtight container in the fridge (or freezer). To be honest, as you only end up with about 3 bowls of soup, there really shouldn't be any problem finishing it!

You may also enjoy these Asian soups: 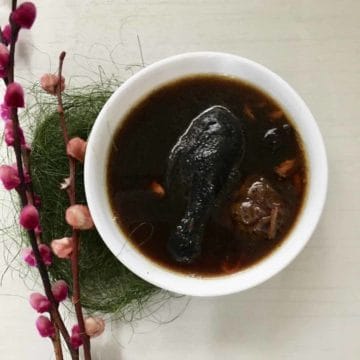 Note: (Optional) you can use a scissors to cut the neck and feet off the chicken carcass. Add these to the soup to boil too. Cutting them exposes the bone which helps to make the soup a little more gelatinous (gives it a better texture.)   Chinese people usually blanch their meat before braising or making soup. I would definitely do that for pork but, for chicken, I cheat and just skim the scum off with a ladle as the soup boils. (See above for photos- the end result is pretty clear despite not being pre-blanched!)
Tried this Recipe? Tag me Today!Mention @GreedyGirlGourmet or tag #greedygirlgourmet!