Traditionally one of the most sought after ingredients in Chinese cuisine, traditional birds' nests soup is a pain to cook. However, this steamed Chinese bird's nest soup dessert with goji berries in a coconut recipe is so easy, I couldn't not share it!

What is bird's nest?

Birds' nests are a traditional Chinese ingredient that has been prized for over 1000 years- not for the taste (it's tasteless) or texture (the gelatinous texture can be confused with that of noodles or even plastic!) but rather for the health and beauty benefits.

According to traditional Chinese medicine, bird's nest soup 燕窝 is said to be good for your immune system and skin (it promotes collagen production).

If you watch Chinese historical dramas, birds' nests are an expensive delicacy and often the favourite dessert of the concubines in the palace- only the royalty and uber rich had access to it then- as they all wanted to be as beautiful as possible.

High quality bird's nest can go for thousands of dollars so bird's nest used to be indispensable at Chinese banquets and other special occasions. It is also considered a good gift for Chinese elders (think in-laws and the like). (The jarred version that I use in this recipe is the cheapest form of bird's nests.)

How is it gathered?

To be more exact, bird's nest is basically the saliva of male swiftlets (a type of bird) which used to be found in very inaccessible areas such as high clifts and deep caves. Hence, collecting bird's nest used to be quite dangerous.

Today, there is so much demand for this Chinese delicacy (especially in mainland China) that concrete houses are being built for them, complete with bird song!

The cleaning process for the bird's saliva is also very tedious: it takes 1 person 8 hours to clean only 10 nests! (Being the nest of a bird, you would obviously find feathers and what not in it, and it is traditional to clean the bird's nest again at home, using tweezers.)

Note: bird's nest can cause an allergic reaction in some people

Bird's nest is produced in many parts of South East Asia, primarily Indonesia (the largest exporter) and Thailand.

Outside of these countries, you can find it at Chinese pharmacies and some Asian supermarkets.

You will hear a lot of anecdotal evidence from Chinese people about the health benefits of this sweet soup, but does it really have any nutritional value?

In recent years, there's been an effort to back up Grandmother's stories with scientific research:

Note: this is meant for information/ entertainment only and not meant as medical/ health advice.

A few years ago, consuming bird's nest was considered unethical as they were being harvested more quickly than the birds could produce them. Moreover, scaling the high cliffs to collect them is dangerous and some people would die in the attempt.

Thanks to the bird nest's industry's boom (estimated to be worth $5 billion in 2015), the swiftlet has been rapidly domesticated and most bird's nests today come from farms, where collection is no longer a problem. In fact, some environmentalists say that the popularity of bird's nest is actually good for this type of swiftlet! (However, only 3 of over 30 types of swiftlets produce edible bird's nest so there is concern that the swiftlets which produce inedible bird's nest will be threatened.)

There was even an urban legend saying that red bird's nest, which is the most premium form of bird's nest and more than 3x the price of the white nests, is cruel- the red colour stems from the blood coughed up by the swiftlet after it is exhausted by all the saliva production.

That is not true!

The red colour is actually due to the minerals in the bird's nest reacting with the environment.

It's more legend than fact, but 1 of the most common "origin stories" is that the Chinese Admiral Zheng He was stranded in SouthEast Asia during the 15th century (Ming Dynasty), due to bad weather. (Random fact: some scholars think that Zheng He reached America before Columbus.) Left with no food, he and his crew consumed the delicate bird's nest that they found on the cliffs, and found that themselves invigorated after.

Hence, Zheng He brought bird's nest back for the Chinese Emperor, sparking the birth of this culinary practice in Chinese culture.

Due to how lucrative the bird nest industry is, reports of fake bird nest often surface- some say that the fake bird nest is plastic and others say it is tang hoon (bean vermicelli). (As the bird's saliva has little flavor, it can be hard to differentiate from other ingredients.)

In addition, some farms are unscrupulous in their farming and cleaning practices, which result in harmful chemicals, such as bleach and lead, being added to the bird's nest so always buy your bird nest from a reputable dealer.

The traditional and "better" type of bird's nest is the dried form, which is super tedious to prepare for cooking (more on that below). As more Asian women started entering the workforce resulting in them having less time to spend hours in the kitchen, a jarred version which can be consumed directly (it is pre-cooked) has since been invented.

Tip: Do note that the jarred versions often include copious amounts of sweeteners, so that can be bad for you, especially if you have diabetes.

Dried birds' nests need to be cleaned before cooking- use a pair of tweezers to gently pluck out any dirt or impurities from the bird's nest and avoid breaking it. After that, soak in warm water for a few hours/ overnight to rehydrate. The rehydrated bird's nest is then ready to be cooked. (Scroll down for more ideas on how to cook the bird's nest.)

Jarred bird's nest, as mentioned above, has already been sweetened and cooked, so you can drink it right after opening the bottle. They come in a variety of flavours, such as bird's nest with stevia, bird's nest with ginseng etc

Traditionally consumed as a dessert, bird's nest is now being used in some premium skincare lines as well.

Alternative ways of cooking this nest of a swiftlet bird are: 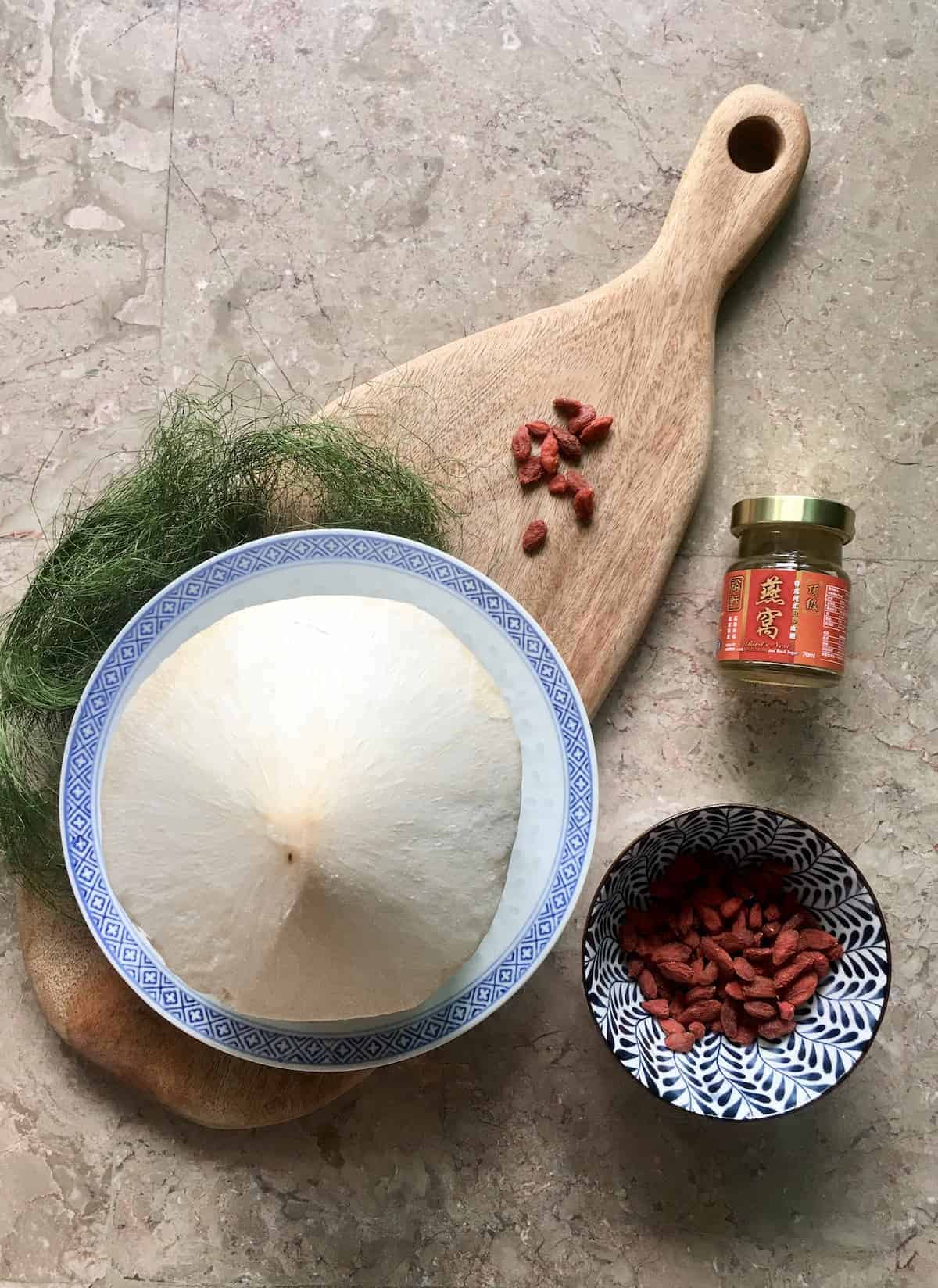 If you don't have goji berries, don't fret, you can still make this easy dessert- it just won't be as pretty or as good for your eyes.

You only need 3 ingredients:

Is Chinese bird's nest soup good for your health?

Traditionally, Chinese people have always associated bird's nest with good skin and healthy lungs. In the last few decades, there's been an attempt to prove these sayings with science and I've included some links to Scientific Research Journals in my post which document bird's nest health benefits.

Other easy Asian sweet recipes include:

Love this Chinese dessert recipe? I'd be really grateful if you leave a 5-star 🌟🌟🌟🌟🌟rating in the recipe card below. If you REALLY like it, it'd make my day if you leave a comment. Thank you! 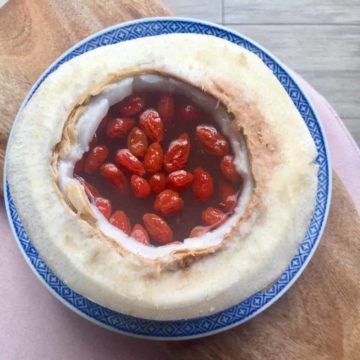 If you don't have a steamer, you can use a pasta pot with strainer to steam the coconut. (Add water to the pasta pot till it reaches just below the strainer, then place the coconut in the strainer, lower into the pot, cover and steam.) However, you will only be able to steam 1 coconut at a time, which isn't very convenient for entertaining!
Note: the nutritional information is an estimate automatically calculated using the WPRM recipe maker as well as a NTUC listing (based on a 70g Eu Yan sang bottle of birds' nest.) I am not responsible for its veracity.

Have you eaten Chinese bird's nest soup before and, if so, how did you find it?