Tang yuan, or Chinese glutinous rice balls, can be served in soup (sweet or savoury) or fried. They also come plain or with filling inside so, as you can see, it is a very versatile and easy dish!

What is Tang Yuan?

It is a traditional Chinese food made of glutinous rice flour balls. They are most commonly boiled then eaten in a sweet soup, but sometimes also in a savoury soup or deep fried.

You might find them plain (with no filling) or with sesame paste or peanuts inside them.

Glutinous rice contains no gluten so the traditional version is naturally gluten free and vegan. (Some modern variations might have weird things added so check before eating.)

Note: If you're on a celiac diet, here are some ways to use glutinous rice flour- my favourite are these chewy matcha mochi muffins! (note not all the recipes are Gluten-Free so pls check carefully!)

If you are in Singapore and want to eat tang yuan, note that they are also called ahballing locally.

I focus on the Chinese version of glutinous rice ball dumplings here, but it is actually an Asian dessert as there is a variation of it in almost every South East Asian country.

For example, the Thai version, Bua Loy, uses a coconut milk soup, sometimes mixed with yam whilst the Vietnamese version is filled with mung bean and in ginger soup.

IMPORTANT: Glutinous rice flour dishes are so sticky, they can get stuck in one's throat if not chewed well (and suffocate you) so CHEW CAREFULLY.

In Japan, people are rushed to hospital (and even die) from eating mochi every year so care should be taken, especially for the very young or old.

Tang yuan is actually a modern, 20th century name for this Chinese dish.

However, it is said that in the early 1900s, Yuan Shikai ordered the name to be changed as "yuan xiao" sounded like "removal of Yuan" so this Chinese snack is now called "tang yuan"- literally "soup round!"

Fun fact: some people use the 2 names- tang yuan vs yuan xiao- to distinguish whether it's prepared in the Southern (former) or Northern style (latter).

I enjoy eating tang yuan at any time of the year but these glutinous rice ball dumplings are actually associated with specific festivals.

The most traditional would be the Lantern festival (Yuan Xiao Jie, which is the last day of Chinese New Year).

However, due to the fact that the name of this Asian dessert sounds like "reunion" in Chinese (glutinous rice balls are "tang yuan" and reunion is "tuan yuan"), they are now also served at weddings, family gatherings, the winter solstice (冬至 dongzhi) and over Chinese New Year. (Usually on the eve, the 7th day (RenRi or everyone's birthday) or the last day (the 15th day of CNY, which is tomorrow!)

If you're wondering why at weddings, it's to symbolise the union of the couple- together forever- and maybe also because the Lantern festival is linked to romance (more on this below).

For a traditional meal, have tang yuan with this Chicken Feet Soup!

Since ancient times, Chinese people have been celebrating the Lantern Festival (Yuan Xiao Jie) by carrying lanterns on the 15th day of the lunar new year.

I remember doing this with my paternal grandparents when they were still alive. It was great fun! 1 or 2 lanterns inevitably catch fire, which is part of the excitement!

The Lantern Festival is traditionally associated with love and romance- probably because it was 1 of the few days that young Chinese females could leave the house! There are more stories behind this Chinese festival but I won't bore you here- click the link if you want to find out more.

Random: did you know that the Chinese word for Comfort/ Safety (an) is literally a symbol of a female staying indoors/ in a house? How patriarchal!

Traditionally, these glutinous rice balls were served white, but modern fusion styles have led to wildly coloured ones, with chocolate flavour (brown), black sesame (black), pandan flavour (green, shown below, popular in South East Asia), sweet potato (orange or purple) and so on.

For plain tang yuan with no filling

You will need only 2-3 ingredients, namely:

I hate to make you buy ingredients that you only use once so click here for more matcha recipes and here for more pandan food ideas.

Some people add some sugar to this glutinous rice dough, but as we are serving the tang yuan in a sweet soup, I find it overkill. Too much sugar is bad!

In addition to the ingredients above, you will also need whatever you want to put inside.

I will update the recipe with directions for glutinous rice balls with fillings at a later date as I want to get this post published before the Lantern Festival which is, well, actually today since it's now 12.42 am.

For the Sweet Soup Base

The basic ingredients for the ginger soup are:

For something fancier, other variations of the sweet syrup for tang yuan include:

Some people like to have their tang yuan savoury- either in a soup or with minced meat inside. As that glutinous rice ball is very different from this sweet one (which is more of an Asian dessert), I will save that recipe for a separate post!

Note: if you like the taste of osmanthus, you may enjoy this gui hua gao recipe

The soup tang yuan are super easy to make - simple boil them- but the coated dry ones are usually deep fried to make them crispy. (This style is more popular in Southern China and South East Asia.)

I prefer the dry style to the soupy version but since frying is unhealthy, have decided to simply boil mine, then roll them in ground roasted peanuts (or toasted sesame), as shown in the photo above- rather similar to muah chee, but with a filling inside and round in shape (muah chee is softer and more free form.)

Remember to drain the tang yuan before coating (or frying!), if not the coating will not be crunchy! (And if you put a wet tang yuan into hot oil, it may splatter like crazy and burn you badly.)

The glutinous rice dough will harden in the fridge. Make sure to keep any extra tang yuan in liquid and refrigerated for no more than 1-2 days.

Frozen tang yuan is sold in Asian supermarkets but, since it's so easy to make these sweet Asian desserts at home, why not make a big batch for the lunar new year then freeze the extras?

These 2 different types of tang yuan literally took me a few minutes to whip up- the longest process was boiling them, which was about 3-4 minutes.

They last for a few months in the freezer. If you're worried about the glutinous rice balls sticking to each other , freeze them with space in between each for 10-20 minutes after which they can be jumbled up in a ziplock bag.

Alternatively, you can lightly dust them with some cornstarch, but I prefer not to do so.

How to cook frozen tang yuan?

The same way you do regular tang yuan- there's no need to defrost. You may need a few minutes more to fully cook them (they're done when they float.) Don't forget to keep stirring so they don't stick to the pot, as well as to not add too many (as they will expand.) 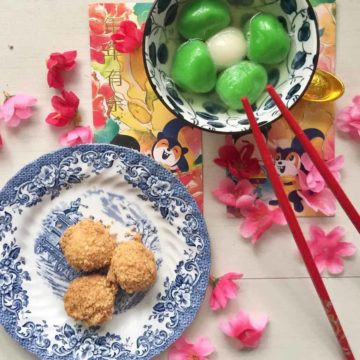 You can make your own pandan juice and osmanthus sugar. If keeping cooked tang yuan in the fridge, store it in liquid for 1-2 days max.   To freeze, space the glutinous rice balls apart for 10-20 minutes in the freezer. After this they will no longer stick and you can jumble them together.
Tried this Recipe? Tag me Today!Mention @GreedyGirlGourmet or tag #greedygirlgourmet!