The Chinese equivalent of mochi, muah chee is a popular, traditional Hokkien dessert which is soft, chewy and bouncy. My easy vegan/ vegetarian muah chee recipe can be steamed, fried or even cooked in the microwave, air fryer and rice cooker!

What is muah chee?

Muah chee (麻糍, also known as muar chee), or Chinese mochi, has a chewy texture. A traditional South Chinese street snack (often eaten at breakfast!) that was brought to Singapore and Malaysia by the Hokkien and Teochew community, muah chee is especially popular amongst the elderly.

Sadly, making it is somewhat of a dying trade these days- lots of work for low returns- and it can be hard to find, so I decided to make my own as my Grandfather was a great fan of it.

ATTENTION: Glutinous rice flour foods are so sticky, if not chewed well, they can get stuck in one's throa and suffocate you so CHEW CAREFULLY. In Japan, people go to hospital (and even die) from eating mochi every year so be extra careful, especially with the young and old.

Fun fact: in Teochew, muah chee means "full of wealth" so it's a very lucky dish to eat during Chinese New Year, and is also a traditional dish to offer to the Gods- apparently, the sticky texture will help wealth stick to you! ("Muah" = full and "chNee" (which is how it is pronounced in Teochew)= $$$) Now that I know this, I made muah chee for CNY!

Have you noticed how similar the 2 names are? However, unlike Japanese mochi which is seen as quite refined and can be rather expensive, muah chee (which is like a Taiwan peanut mochi) is usually a cheap street snack (which is rather unfair as it is not traditionally any less work to make!)

Mochi usually comes in a round shape with a filling, but the latter is a softer, plain, formless dough that's traditionally coated with peanuts and/ or sesame.

Note: there is a similar Chinese dessert called tang yuan (glutinous rice balls) that is more similar to mochi. Chinese people normally eat that on winter solstice and on the last day of CNY.

IMPORTANT: cut the muah chee (and mochi) into small pieces and chew them well to avoid small bowel obstruction (which would cause significant stomach pain and maybe even hospitalisation.)

For the glutinous rice dough

Substitute: Mochiko flour (Mochiko is made from cooked mochigome, a glutinous short-gain rice, but it creates a less elastic dough so your final result will not be so chewy) For more glutinous rice flour alternatives, click here.

Do not use rice flour instead! They're not the same thing at all. Some muah chee recipes recommend tapioca flour or potato starch as an alternative to glutinous rice flour but I've not personally tested them (yet). Will update with photo comparisons once done!

Modern twist: today, there are South East Asian variations of muah chee which use pandan juice.

The ratio of glutinous rice flour: water determines the texture of the snack. Good muah chee should be chewy, bouncy and almost stretchy - if you use too little water (for example, an equal ratio of water and dough), you'll end up with a too-thick dough that isn't bouncy in the least.

Substitute: You can use shallot oil, peanut oil or- as a last resort if you're trying to be healthier- a neutral vegetable oil such as sunflower oil. Note that the muah chee won't be anywhere as fragrant if you use a veg oil- in that case, pile on the toppings to make up for the lack! (Pork lard is the most traditional and also the tastiest alternative but obviously not vegan or vegetarian.)

I don't recommend olive oil as the taste is quite strong.

Note: if you're frying, omit the oil from the dough mixture. (It'll be added at a later stage- adding a bit of oil to the dough makes it a little silkier.)

Note: the amount of sugar is a guide- you may want to add more/less to your Chinese mochi depending on how sweet of a tooth you have!

He stirs and pounds the dough for ages so it is much springier than any homemade muah chee and I highly recommend trying it. Well, you could probably get your Chinese mochi as bouncy if you're willing to spend an hour or so stirring and beating!

(You can still find this snack at pasar malams (night markets)- not that we have many of those at the moment due to crowd control measures- but those are usually bland microwave versions that pale in comparison to the traditional.)

Modern twist: you can use any other crushed nuts, such as cashews, hazelnuts, brazil nuts, brown sugar, grated coconut or a mix of ingredients.

Japanese fusion: to make it more like Chinese mochi, use green tea instead of water and/or coat the pieces in matcha powder!

As there are so few ingredients in this recipe, it's important to use the best you can find. Hence, I prefer to fry my own peanuts- tastier than baked- then blend them (with the sugar) for the coating. This is quite a pain as if your raw peanuts have their skins, you're going to spend quite a bit of time removing the skins. (Don't process for too long or all the oil will come out and you'll end up with peanut butter.)

Or dry fry store-roasted ones to "wake them up"

An easier method is to buy store blended peanuts, and toast the mixture in a dry pan before making this Chinese mochi. (Or get unsalted, roasted whole peanuts, then process them yourself - these nuts are usually fresher than the crushed ones and you have more control over the texture.)

For more information on frying peanuts, and if you're a fan of them, you may want to check out my Chinese vegetarian peanut cookies recipe, 1 of the most popular recipes on this blog.

Note: It's harder to find pre-ground black sesame powder but you can dry fry black sesame seeds then put them through a spice grinder. (Apparently, black sesame muah chee is extra auspicious!) Whichever you choose- peanut or black sesame- you need to mix it with sugar to make a tasty coating for the dough.

Muah chee is traditionally cooked over a low fire, but I've made my Chinese mochi recipe flexible so it can be steamed, fried, cooked in the microwave, rice cooker or air fryer. Personally, I find steaming the easiest as it's mainly passive cooking compared to the other methods where you need to stir the dough every few minutes.

Note: you can even use a thermomix if you have 1!

A quick summary of cooking times (excluding the time to stir and fold the dough at the end):

Note: you can also make a boiled version then coat it with peanuts and sesame- sort of like a Taiwan peanut mochi recipe. This will take about 20-30 minutes but is quite a different process to the above methods, so I'll leave it for another post!

If you're pressed for time, microwaving is the way to go, as a good microwave should cook the dough in 3-4 minutes, which is 20% of the steaming time! The texture is going to suffer though, so make sure you stir and fold MANY times at the end.

Don't add the oil to the dough as you'll be using it to pan fry.

What type of Rice Cooker?

Any rice cooker works- if yours is a modern multi-function machine, use the regular "cook rice" function. However, note that if you have an older model which doesn't have a non-stick pot, you may have some problems getting the dough out!

Muah chee tastes best when eaten right after cooking- if not, it becomes less soft and bouncy. However, if you made too much of this Chinese mochi, cover the uncoated dough tightly with cling film and store in the fridge for 3-5 days. (Once cold, the muah chee will harden - and won't be sticky- so you will need to reheat before coating and serving.)

If you've already coated the dough, it will taste good left at room temperature for up to 1 day- moisture will start forming which will make the coating soft, so coated muah chee shouldn't be left overnight.

The peanut or black sesame toppings can be stored in an air tight container at room temperature. Ideally, don't mix in the sugar till right before coating the dough, as the oils of the peanut and sesame will melt the sugar.

Steam till soft, cool for 10 minutes, then coat the Chinese mochi with your preferred topping.

Yes. The traditional ingredients are glutinous rice flour, crushed peanuts (or black sesame, water, salt, sugar and an oil (usually pork lard, shallot oil or sesame oil)- all of which do not contain gluten

Why is my muah chee not chewy?

Your water: glutinous rice flour ratio is probably wrong. Too little water will result in a hard and non-chewy texture. More details in the post and recipe card on the correct ratio.

Can you keep muah chee overnight?

Yes. It's best eaten right after making but the uncoated dough can be kept for 3-5 days in the fridge. See my post for more details on storage. 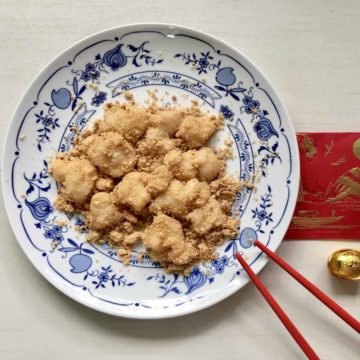 For oiling the equipment

Frying- don't add the oil into the liquid dough

Note: if you're finicky, you can sieve the liquid dough before cooking but I don't and haven't had any issues with lumpy batter.   Stir and fold well after cooking the dough- this is the key to the chewy and bouncy texture of the dough.   To make your own shallot oil, heat up ½ Cup of neutral vegetable oil then saute 8-9 shallots (sliced thinly) in the oil over low heat till the shallots have turned golden brown. After the mixture has cooled, sieve out the shallots- which can be added to soup or rice- and the remaining liquid is shallot oil.   The coated muah chee will become wetter as time goes by so should not be kept for more than 1 day. (Leave at room temperature and not the fridge.) The uncoated dough can be kept in the fridge for 3-5 days, and steamed then coated when you want to eat it.
Tried this Recipe? Tag me Today!Mention @GreedyGirlGourmet or tag #greedygirlgourmet!

If you've made this Chinese street snack, which method did you go for? I like steaming and frying the best!