Using only 3 ingredients, this easy thick salted gula melaka coconut caramel sauce (naturally vegan too) is scrumptious and perfect for drizzling on ice-cream, cupcakes or other desserts!

An old friend is allergic to dairy and eggs, so I started experimenting with vegan desserts for her. When she heard about my coconut pandan cupcakes, she asked me to make a dairy-free version for her, which is how this no dairy easy thick salted gula melaka coconut caramel sauce came about. Even though I'm not vegan (flexitarian), gula melaka and coconut are such a marriage made in heaven that I actually prefer this to regular caramel! I love scooping it over my pandan makes and bakes, such as this vegan kueh dadar! (OK maybe sweetness overkill here...)

What is gula melaka?

Gula Melaka is a very popular sugar in South East Asian and used in many South East Asian recipes, such as these Vietnamese baked fish sauce chicken wings. It's made from the sap of a palm tree (date, coconut or sago palm) which is boiled till thick then poured into bamboo tubes to solidify. Hence, you buy it in huge cylindrical blocks and not grains like regular sugar. To use it, you usually chop it up or grate it, which makes it a little less convenient then regular sugar. (FYI The substitution ratio for gula melaka and sugar is 1:1)

Different brands differ in taste (generally butterscotch notes) and colour- varying shades of amber to dark brown- as well as consistency! In fact, depending on the time of the year the sap is extracted, even gula melaka from the same brand can be of different sweetness.

Why make this sauce?

Although salt, gula melaka & coconut milk are South East Asian pantry staples, if you happen to run out, here are some alternatives you can use. Also, I find it easier to use recipes if they're in ratios, so the ratio of ingredients here is 7 (gula melaka): 3 (coconut milk): 2 (water) + a pinch of salt! Scale up or down depending on how much you need- it could be 7 tablespoons or 7 cups!

Sugar instead of Gula Melaka

If you don't have gula melaka (palm sugar) on hand, feel free to use sugar. Brown sugar is recommended, but if you want something that is of a lighter hue, go for white sugar instead. (You can also use coconut sugar.) It won't taste quite the same as a caramel made from palm sugar- gula melaka and coconut are very complementary flavours- but it'll still make for a decadently rich vegan dessert topping.

Can you make salted caramel sauce with coconut cream?

Yes, simply add water to the coconut cream in the ratio 2:1 (so for 1T coconut cream, add 2T water), and stir well.

Conversely, to make coconut cream, leave canned coconut milk in the chiller overnight. The cold will cause the fat to separate, forming a solid layer at the top. Simply skim this thick layer off, then whisk it till creamy to get coconut cream from coconut milk!

Classic caramel can be made by the wet method or the dry method. Obviously, we're using the wet method since we're adding water! Why? The water helps make the caramel brown more evenly and it also increases the time required for the sugars to caramelise, resulting in a tastier vegan caramel sauce.

Can I speed up the process? Yes:

- Use a wide pot or skillet

To get a nice, thick, syrupy coconut caramel, you need to cook this over low heat for some time. The longer you cook it for, the thicker it will be (do keep stirring to make sure the bottom doesn't burn!) This time also helps to caramelize the gula melaka and the sugars in the coconut, giving the gula melaka caramel a deeper and more complex flavour. (People think the flavour in caramel is from the butter, but actually a lot of it is from the Maillard Reaction and the breakdown of the sugar molecule, and all that takes time!)

Using a wide pot or skillet, however, will increase the surface area and allow the water to evaporate more quickly.

Note: The dairy-free coconut caramel sauce gets very hot and can burn you badly so make sure you're very careful when you make this saucel!

Always use a bigger pot than you think you need as you don't want the caramel to overflow and try not to leave it unattended towards the end as it will only take a minute to burn.

Remember not to taste the caramel syrup till it's cooled!

However, if you're really rushed for time, use coconut cream instead of coconut milk. Add it to the pot with the gula melaka, bring to a boil and add a thickening agent, such as arrowroot or cornstarch, to the pot. (If you're after a vegan salted caramel, throw in a pinch of salt too.) Reduce the heat to low (you want the mixture to simmer not boil) and stir continuously with a heat-proof whisk for 4-5 minutes. After switching off the heat, the sauce will come together and you'll get a thick caramel.

Note that whilst this quick and easy 5-minute no-dairy coconut caramel tastes good (there is a truckload of sugar and fat in it, after all) the quick version will never taste as good as the previous version, as there's no substitute for time.

How to use this

This is not meant to be a vegan version of butterscotch/ caramel, as it's meant to taste like coconut and regular caramel is not coconut-ty! (Which is why I'm not adding vanilla extract.) (Pet peeve: I've tried previous vegan versions of classic recipes which, though tasty, tasted nothing like the original as the coconut was so strong! Don't try to pretend it's something it's not!) However, you can use it in the same way you use a regular caramel: 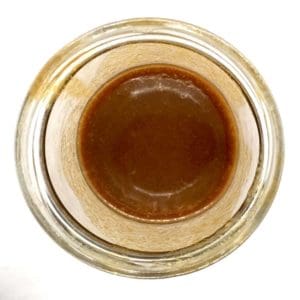 Remember that the coconut caramel sauce gets very hot so make sure not to burn yourself!
« 11 Activities in Singapore for foodies (beyond eating)
Singapore kueh dadar pandan coconut pancake recipe (Vegan) »

Get ready for Chinese New Year with these easy Asian recipes!