This easy lychee tea recipe is non-alcoholic and a perfect refreshing beverage for a hot summer's day! It can be easily varied by changing the type of tea used, or adding other ingredients such as lemon, rose or ginger.

Lychee (荔枝, lì zhī), also known as lychee nuts, litchi and litchi nuts, is a fruit from the Soapberry family. Native to Southern China, it used to be a delicacy of the Chinese royalty but is now readily available year round in the dried and canned form.

You can also get fresh lychee when it's in season, from June-July. The lychee plant is amazing: there is a 1000 year old lychee tree in China that still bears fruit today!

Note: you can also make lychee tea using Vietnamese lychee tea bags- Vietnam is known for its sweet lychees, and even supplies them to China!

For more easy canned lychee recipes, check out this link.

Lychee has been used in ancient Chinese medicine for many ailments, from stomach ulcers to coughs. Some modern research has shown that lychees have anti-tumor properties but more work needs to be done to confirm this.

For a lychee dessert recipe, check out this Lychee konnyaku jelly, which my friends gush about!

Only the pulp is edible- the seed and peel are not. A lychee has one large seed, so be careful when eating it- the seed is not only a choking hazard, but can be toxic. Unripe lychees also have toxins that can lead to super low blood sugar. Hence, only eat ripe lychee!

Eating fresh lychees have led to reactions in some people, such as swelling of the lips and throat, dyspnea, or diarrhea

In 2019, according to CNN, many children in Northern India died from a brain disease associated with toxins from lychees. A BBC report stated that the children ate a lot of lychees on an empty stomach so I would not recommend eating too much of this fruit when hungry!

Moreover, in Traditional Chinese Medicine, foods are divided into neutral, heaty and cooling ones. Lychees are considered a heaty food so eating too many is thought to lead to illnesses such as sore throat, acne or fever.

1. Make sure the tea has been chilled in the fridge before adding the ice to prevent it from melting and watering down the tea. (I like to use lychee ice cubes so that the tea can sit out in the heat without getting diluted. To make lychee ice cubes, freeze some of the lychee tea into ice cubes.)

2. Taste again before serving as the temperature affects our perception of sweetness. The lychee green tea could taste perfect when hot but bland when cold.

3. This lychee drink must ideally be prepared a few hours in advance as it tastes best after the lychees have infused their flavor into the tea. If you drink the tea when it's hot (unsweetened), it will taste almost sour and a little bland.

4. If you do not have time to allow the lychees to steep in the tea, you can decrease the tea: lychee ratio.i.e. use fewer cups of water for 1 can of lychees!

Does lychee tea have caffeine?

If you're using the typical tea base of green tea or black tea, then yes it will have caffeine. if you use a herbal tea bag such as ginger, lemon and honey tea, then your lychee drink will not be caffeinated.

How to say "lychee"?

Lychee is pronounced as lie-chee (lie as in telling a lie and chee as in chee-se.) In Chinese, it is li zhi, which has been anglicised to litchi.

Love this recipe? Please leave a 5-star 🌟🌟🌟🌟🌟rating in the recipe card below & if you REALLY like this, consider leaving a comment. Thanks! 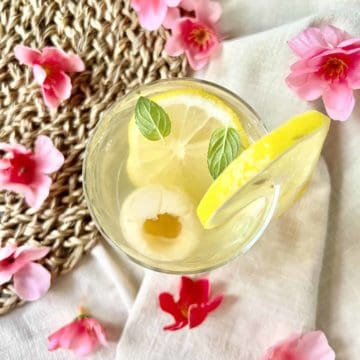 For the lychee tea

You switch off the fire before the water comes to a full boil as you should not add boiling hot water to green tea. Green tea tastes best when brewed at between 145F- 185F (62.8C- 85C) If you are using a green tea base, do not steep your tea for more than 3 minutes as it may become bitter.  After adding 2-3 lychees per cup, you will end up with extra lychees! You can eat them- they'll be a little soft and not quite as flavorful- or add them to any lychee ice cubes that you may be making. Lychee iced tea variations Note: the nutritional information is an estimate automatically calculated using the WPRM recipe maker and I am not responsible for its veracity. It is solely for this iced lychee tea recipe and does not include the nutrition information for lychee ice cubes! It may also vary depending on the brand of the products you use,

If you've enjoyed this non-alcoholic lychee drink recipe, please do share it on your social media!