I have a love-hate relationship with fermenting and preserving food at home. On one hand, I love, love, loooove the idea of doing it (and eating fermented foods!) but on the other, I never know if I'm doing it right/ whether the resulting food is edible! I think the first time I actually had the courage to try one of my home ferments was when I made maesil-cheong (which was just last week LOL - it can be used for Korean plum tea or in cooking. To be fair, I would have tried the miso I made if I could have brought it back to Singapore to me. Alas, mid-ferment, I moved back from London to Singapore for good and there was no way to carry the half-done miso on the plane!) I tasted the maesil-cheong on the 8th day of the ferment, and it tasted soooo good that I was encouraged to do a few more home fermentation projects: making tangerine-cheong and now fermenting makgeolli at home with a kit!

Makgeolli is a traditional Korean sparkling rice wine made from only 3 ingredients (rice, water and Nuruk)- in fact, it's the oldest alcoholic Korean beverage. Every home used to brew their own makgeolli but makgeolli declined in popularity due to competition from imported alcohol. (I've also heard other theories behind its decline e.g. makgeolli was made from wheat flour instead of rice for a period of time, resulting in an inferior tasting drink.) It's popular amongst farmers, and is even called "nongju" or farmer's drink.

Makgeolli is cloudy, fizzy, high in calories and best served cold. It goes very well with Korean food and has been making a comeback in recent years- in fact, Michelin even published a post recommending what Korean dishes to pair with makgeolli!

I've toyed with the idea of making my own Makgeolli before, but never got round to it till I came across this Make-Makgeolli-at-Home kit which seems, well, pretty much idiot-proof.

Why make it at home?

Note: according to the website I bought this kit from, if you use this Makgeolli Damda kit, your 1 litre of makgeolli will have 100x good bacteria (100 billion CFU) than 1 litre of yoghurt (1 billion CFU)! I'm almost convinced to make this on a weekly basis as a health drink now!

What does the makgeolli kit include?

The Makgeolli Damda kit comes with:

Making makgeolli from scratch would take 7-10 days for fermentation. However, my kit only takes 24-36 hours! I'm really curious how the manufacturer of the kit expedites the fermentation- it reminds me of how box mix hotteok ferments instantly whilst made-from-scratch hotteok needs an hour or so.

Homemade makgeolli needs to be refrigerated and tastes best chilled. It will continue ageing in the fridge and improving in taste and fragrance.

Is it cheaper to make it at home with a kit

You use 1 packet per batch of makgeolli (which is 1 litre), so each kit can produce 2 litres of makgeolli. The kit costs $19.90 from blue basket (click on the link to purchase- note this isn't sponsored. I bought the kit with my hard-earned money!)

On the other hand, a quick google search shows that a 750ml bottle of makgeolli costs $8.90 on Amazon.sg/ Lazada which works out to $23.73 for 2 litres. In other words, you actually save $3.83 (excluding the cost of the water :P) making makgeolli at home with a kit! And you have fun in the process, bargain! I was originally expecting the homemade makgeolli to cost more (paying for the experience and all that!)

Note: If blue basket doesn't deliver to your country, I did a quick search on Amazon.com and it seems there are quite a few makgeolli making kits available! A common complaint is that the English instructions are sparse so luckily you have my post to help you 🙂 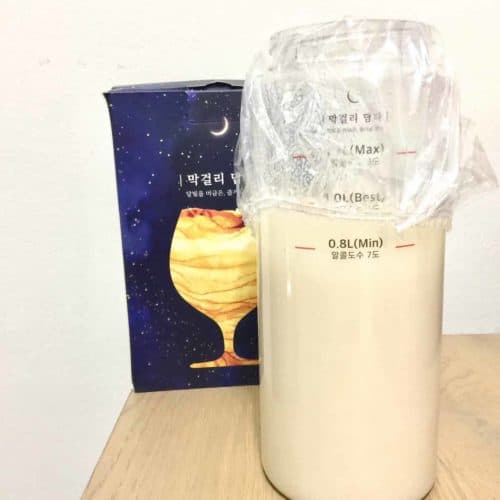 How to make makgeolli at home from a kit

Note whilst the packet does not say what kind of water to use, traditionally people used spring water for fermentation. As most of us living in cities these days don't have access to a spring, I used boiled tap water instead. (Please make sure the tap water in your country is safe to drink if you are using tap water!) Your tap water may contain chlorine so you will need to boil it for 15 minutes to remove the chlorine, as the chlorine may interfere with fermentation.   Alternatively, you can use distilled water (don't use regular bottled water as it may contain fermentation-inhibiting chemicals too.) Since each box comes with 2 packets, I plan to do my first ferment with boiled tap water and the second with distilled water to compare the difference.   If you're making makgeolli in winter, your bottle may like to be cuddled by surrounding it with a blanket to keep it warm 🙂
Keyword alcohol, Fermentation, Korean

Have you tried makgeolli before and would you make it at home?

Other Korean recipes that you may be interested in include Korean boricha, maesil tea and hotteok.

Get ready for Chinese New Year with these easy Asian recipes!