Since I just shared a recipe for a 5 spice powder home blend, followed by a tau yew bak recipe (pork braised in soy sauce and 5 spice powder), it seems only natural to follow up with a post on how to use 5 spice powder.

After all, it's not one of the most commonly used spices in the kitchen, especially if you like Chinese food, so you may need some inspiration! 🙂 I often do, even though my family has cooked Chinese recipes all my life. (If not my McCormick bottle just hibernates on the spice rack till it's tasteless. Which is why I now make my own homemade 5-spice powder- using star anise, Sichuan peppercorns (Szechuan peppercorns) orange peel (sometimes) etc- instead of buying it from the supermarket- it taste so much more vivid that way too! If you don't have a coffee grinder or spice grinder, you can use a mortar and pestle as I did)

5-spice powder is a fine powder ground from spices that are commonly used in almost all branches of Chinese cuisine. (It is also used in Vietnamese and Hawaiian food.) The "5" in "5-spice" actually refers to the 5 Chinese traditional food elements- sweet, bitter, sour, salty, and umami (savoriness)- and not the number of spices in the powder. Hence, some 5-spice powders actually have more than 5 spices in them. In fact, there is even a less-common 13-spice powder in Chinese cooking!

I guess you could say it's a bit like the Asian equivalent of all-spice or a wonder powder? 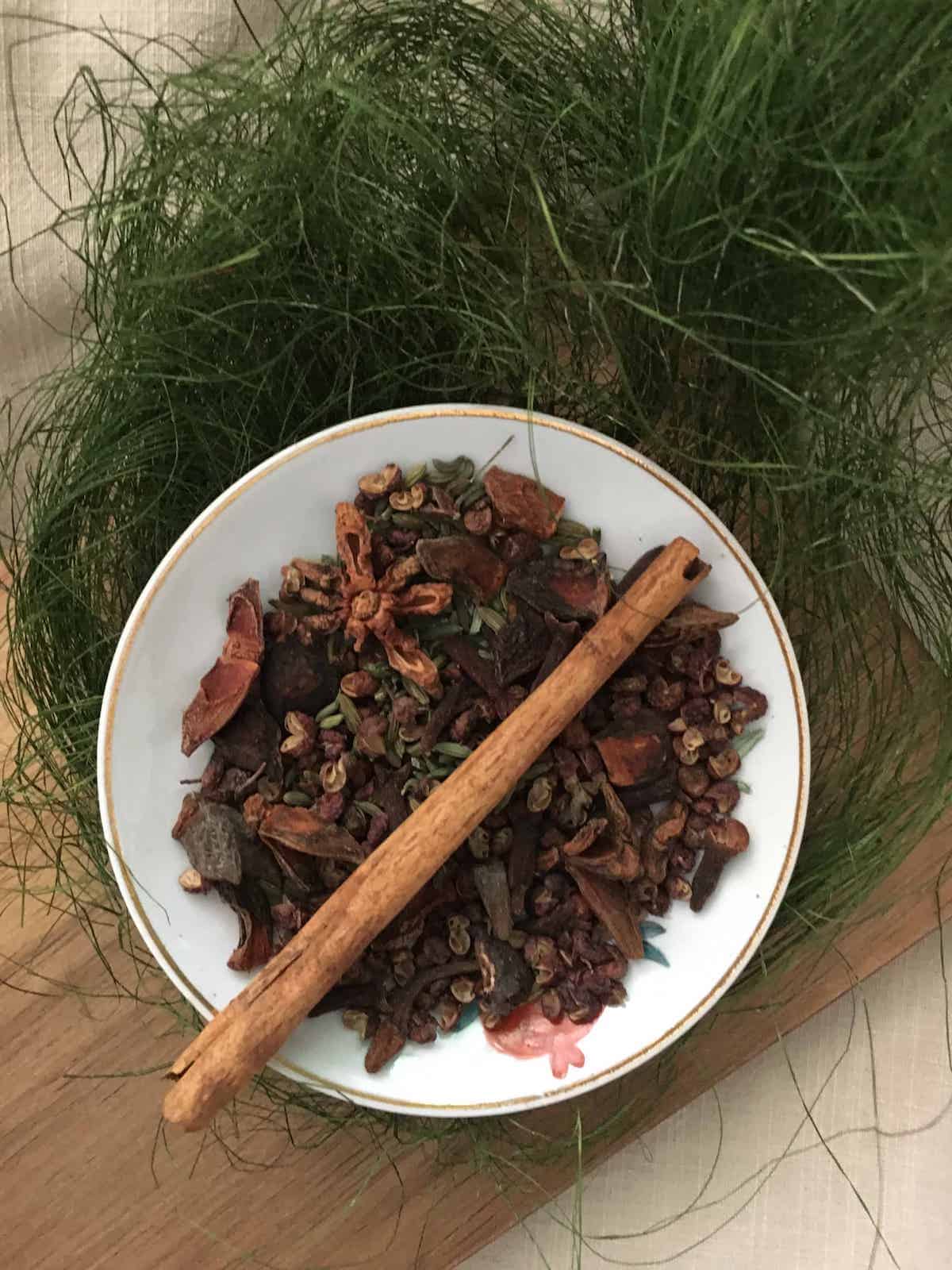 The most commonly used spices in 5-spice powder are fennel seeds (xiǎohuíxiāng 小茴香), star anise (bājiǎo 八角), cassia cinnamon sticks (ròuguì 肉桂 also known as Chinese cinnamon and not to be confused with Ceylon cinnamon/ true cinnamon), Sichuan pepper (huājiāo 花椒) and a little bit of whole cloves (dīngxiāng 丁香- this spice can be overpowering so needs to be used in moderation. It's also expensive.)

However, it is not unheard of to use ginger root, sand ginger, nutmeg, turmeric. anise seed. cardamomum, tangerine peel, galangal and licorice in this Asian spice recipe. Adding a bit of black pepper can also give the woodier a slightly spicy flavor.

Note: don't use too much cassia in your cooking as it can be bad for you.

It has a complex flavor and unique aroma- some people describe it as a lemony flavor with the taste of licorice. Since every recipe uses a different blend of ingredients, no 2 5-spice powders taste exactly the same.

Either way, these ground spices are a great addition to your spice cabinet- you can use it in dry rubs for seasoning meats (think Peking duck) or even to fry rice!

You can get the most of the whole spices or the actual 5-spice powder in almost any grocery store, as it's quite a mainstream ingredient today. The only exception may be Sichuan peppercorns. If you can't find it, just go online or head to the closest Asian market.

Like most spices, 5 spice powder doesn't expire or go bad so to speak if kept dry in an airtight container. (If stored improperly or if it gets wet etc, it may go moldy- in that case, toss and don't use!) However, as time goes by, the powder will start losing flavour.

This happens quite quickly which is why I advocate keeping the whole spices instead (these keep their fragrance for a longer time) then grinding to produce homemade 5-spice powder whenever you need it.

What can I use instead of five spice powder?

You can also use it as part of a spice rub- as you can see from the recipes below, 5-spice powder goes really well with pork!

Cantonese Hong Kong-style Soy Sauce Chicken with Rice
This soya sauce chicken recipe calls for a few spices to be added to the soy sauce poaching liquid- if you don't have the whole spices on hand, substituting with a pinch of 5-spice powder will do the trick! As good as takeout, easy to make with easy to find ingredients and only requiring 1 pot, this is a recipe you shouldn't miss!
Check out this recipe

If you don't have the 2.5 hours that the above recipe calls for, try this easy and "quick" version (done in 50 minutes):

Tau yew bak, or singapore braised soya sauce pork
1 of the most beloved and common dishes of the Singaporean Chinese family kitchen, this pork dish is delicious and easy to make
Check out this recipe

Home roasted char siew or Chinese BBQ pork
In Singapore, the most popular cut for char siu is pig armpit- doesn't sound appetising, but it has the perfect blend of fat and meat, making for heavenly BBQ pork. I'm not sure what the English term for it is, but I guess pork shoulder, as called for in this recipe, is a close second!
Check out this recipe
Chicken thighs baked with honey, soy and 5 spice powder
If the salmon meatballs weren't quite your thing, these chicken thighs are marinated with a similar sauce and just as tasty!
Check out this recipe

Taiwanese popcorn chicken
One of the most popular snacks at Taiwanese night markets, these little morsels of crunchy goodness are a must add to your weekly menu! (Or perhaps fortnightly, since fried foods aren't the healthiest!)
Check out this recipe

Salmon meatballs with honey, soy and 5 spice powder
A healthy and delicious recipe, 5 spice powder is more commonly used with pork so fish makes a light and refreshing change!
Check out this recipe

5 spice powder is most traditionally used with meat- especially pork- so I specifically decided to include a vegan section for this list!

Vegan bao with a mushrooms in 5-spice powder filling
5 Spice powder also goes really well with mushrooms, which make up the filling of these scrumptious Chinese baos
Check out this recipe

Vegan dan dan mian (noodles)
Mushrooms are the typical substitute for pork in vegan Chinese dishes so, as with the previous recipe, this vegan dan dan mian also comprises mushrooms in a savoury and unctuous 5 spice powder sauce.
Check out this recipe

PS If you're not a chocolate fan, Gary Jones (who works with Raymond Blanc) has kindly shared a mulled wine, fruits and ice cream recipe that uses 5 spice powder, courtesy of the Great British Chefs website. I've also heard of people adding a pinch to their pumpkin pie- next Thanksgiving dessert, perhaps?

Chocolate rolls seasoned with 5 spice powder
I've seen a couple of chocolate recipes that use 5 spice powder - it's a flavour combination I've never tried but, as a chocoholic, couldn't not include this 5-starred recipe! Can't wait to try it!
Check out this recipe

5-spice banana bread
I always see posts on facebook asking for recipes to use up bananas that are NOT banana bread- if you're tired of banana bread, try this innovative 5-spice version before giving up on it!
Check out this recipe

Which of these ways to use five-spice powder is your favourite?

Before you go, you may also like these Asian recipes: