Agar agar can be used to make anything from jam & jelly to pate and cheese! Whilst easy to find in Asia and health shops, it is not stocked in all the major supermarkets in the west. If you can't get your hands on some, here are 8 of the best agar agar substitutes.

What is agar agar used for

Agar agar, also known as Kanten, Japanese Isinglass or China Grass, is a vegetarian gelatine made from red algae sea weed. It comes in the form of agar agar flakes, strands and powder, the last being my favourite as it's the easiest to use.

In South East Asia, agar agar has traditionally been used to make jellies and is something we grew up eating. Compared to jell-o made from gelatin, agar agar jelly has the benefit of being stable at room temperature (i.e. does not require refrigeration.) It is also used in small amounts as a thickening agent in some jams.

Unfortunately, it is not quite as ubiquitous in the West though recently it has become more commonplace, especially in vegan cooking where it is used as a vegan gelatin substitute. Some people use it to make vegan cheese, jelly and pate, for example. (Pate made from meat gets its gelatinous texture from the meat, so when making a vegan substitute, a vegan gelling agent such as agar agar is necessary to replicate the original mouthfeel.)

I've written quite extensively about agar agar in my no-sugar vegan jelly post, so I won't repeat myself here, but do click on the link if you want to find out more. 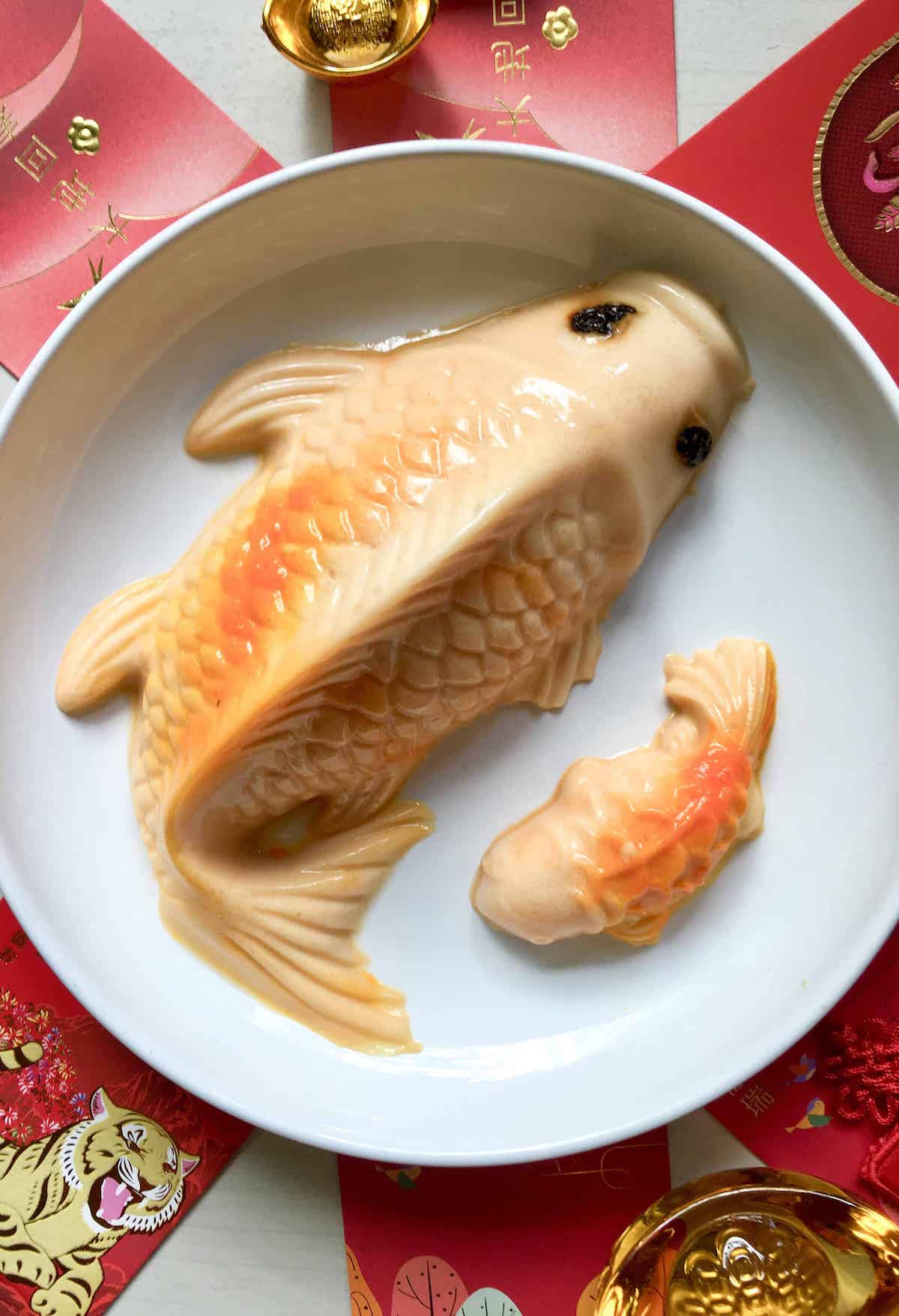 This koi shaped jelly is made from agar agar during the lunar New Year to represent good fortune ahead.

You can get agar agar in regular grocery stores in Asia. Outside of Asia, you may have to try the local Asian markets or a specialty store (such as health food stores)

When I lived in London, UK, I would pop over to the Chinese supermarkets in Chinatown to stock up on this.

How to use in cooking

To determine what makes a good substitute for agar agart, we first need to know what people use it for. I'll be looking at agar agar in the kitchen here, as agar agar is also used in other things such as kid's clay, which I'm not qualified to write about! It has a whole range of culinary applications, such as:

Moreover, agar agar does not gel well in acidic liquids so If you're working with citrus fruit (e.g. orange juice), you may want to use 1 of the replacements below.

If you're on a plant-based diet, you may be interested in these 100 delicious vegan recipes. Vegan and vegetarian alternatives to agar agar include:

Before you leave, here are some Asian jelly recipes that may interest you: