A Cooling Asian Sea Coconut dessert with longan soup, the perfect tong sui for hot days. There are 2 versions: 1 that is made in under 5 minutes and another in another 30 minutes, depending on how much effort you want to put in!

What is sea coconut?

What we know as sea coconut in Asia is not real sea coconut at all. In fact, it's not even a coconut but actually the fruit of the Palmyra palm or toddy palm. (Also known as Tah, Tai, Talouriksha Palm, Lontar, Wine Palm, Tala Palm, Doub Palm, Sugar Palm, Sea Coconut, Fan Palm and 糖棕.) Traditionally, many parts of the Toddy Palm are consumed as food: the fruits have been eaten boiled, roasted and even raw- they're often made into sea coconut jellies in South East Asia. The pulp is often pickled and the sap can be drunk or made into a type of sugar.

The "real" sea coconut is known as Lodoicea, Maldive coconut, coco de mer, and double coconut- it is an endangered and protected species endemic to only 2 of the Seychelles islands.

If you're wondering why the confusing name, Chinese myths say that the toddy palm arrived on the shores of Southern China a long time ago. As they looked like coconuts and tasted sweet, the locals believed that they were a type of coconut that grew under the sea, and gave it its now-confusing name.

In Traditional Chinese Medicine, Sea coconut is believed to be a cooling food that is good for phlegm and coughs. It is also thought to help with nausea and stomach upsets. However, I have not been able to find any scientific studies to prove these claims.

Note: This information is for entertainment only- for health and nutrition advice, please consult a qualified medical professional.

Fresh vs dried vs frozen vs canned

Sea coconut comes fresh, dried, frozen and canned. Dried sea coconut is common at Chinese Medicine shops, and the canned form is easy to find in supermarkets in Asia. Frozen and fresh sea coconuts are a little rarer though- particular fresh as it goes bad quickly, especially in hot weather.

If you live outside of Asia, your best bet is going online to find Asian sea coconut. if not, as mentioned above, a Chinese prescription shop should stock the dried type. As Thailand is the largest producer of sea coconut, try the Thai grocery stores for the fresh, frozen and canned versions.

The ingredients you need depend on whether you're making the super quick, super easy sea coconut dessert which uses canned sea coconuts and canned longans or the more traditional tong sui version, which requires some simmering, and is supposed to be better for one's health.

For the easy, no cook version, you will need:

For the stewed tong sui, you will require:

How do we cook sea coconut?

Sea coconut is popular in Chinese and South East Asian cooking. It can be eaten with longans (as per the recipe in this post), stewed with white fungus as a tong sui, simmered with pork or chicken to make a savoury soup or mixed with chilled jelly and consumed a refreshing dessert.

Other recipes that are popular when the weather is blazingly hot include:

Traditional Chinese Medicine (TCM) believes that food can be divided into 3 types: heaty, cooling and neutral. If you're looking for warming foods, you may be interested in these recipes: 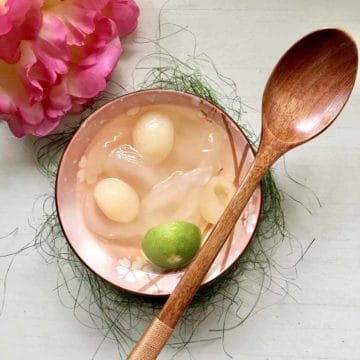 Note: we sweeten the dessert after chilling as the sea coconut dessert will taste different at different temperatures (i.e. it may taste sweet enough at room temperature but too sweet/ not sweet enough once cold.)   Note: rock sugar is traditional in Chinese tong sui, but it is difficult to dissolve, especially since we're adding the sweetener after the dessert has cooled, which is why I use honey. brown sugar or regular sugar instead.   Some people like to add white fungus to their sea coconut and dried longan tong sui.
Tried this Recipe? Tag me Today!Mention @GreedyGirlGourmet or tag #greedygirlgourmet!