An easy, 3-ingredient recipe that only requires a few minutes, lemongrass simple syrup can be used in anything from cocktails, tea and bakes to jellies. My recipe also shows you how to preserve the delicate lemongrass flavour, which is easily destroyed by heating.

What is lemongrass simple syrup?

Simple syrup is a key ingredient used in cocktails and many other beverages as it mixes readily with water. It is sold in supermarkets, but isn't cheap, so luckily it can be easily made at home!

You can also use other herbs and spices to make different flavoured simple syrups, such as this matcha green tea syrup which is great for lattes and desserts.

Note: if you have too much lemongrass, why not try infusing it in this ginger coconut chicken broth or 1 of these delicious Asian lemongrass recipes?

Note: This is similar to how some herbs and spices are added in the last 30 minutes of making broth, so that the flavours aren't dulled.

Tip: heating the water before adding the sugar also reduces the time taken for the sugar to dissolve!

Lemongrass simple syrup can keep for 1 week in the fridge. (Some people keep it for 2 but I prefer to err on the safer side.) If you want it to store for longer, add more sugar and make a lemongrass rich simple syrup instead. (Sugar is a natural preservative.) If the syrup has gone cloudy, that's a sign of bacteria growing so toss it out!

Note: Always use a clean spoon when scooping the syrup out of the jar!

1. If using fresh lemongrass, bruise the stems by hitting it with the blunt edge of your knife (or your pestle) which allows the citrus flavour to be released more readily.

2. You can vary the flavour by adding other herbs and spices such as ginger, Thai basil, chilli and kaffir lime leaf when infusing the lemongrass.

Do you need to cook simple syrup?

Traditionally, the sugar and water are heated to make simple syrup. However, it's not entirely necessary- you can make a cold-infused simple syrup as sugar melts in water even at room temperature. It will take longer than the old-fashioned cooking method, but it better preserves delicate flavours such as the lemongrass in my recipe. Do note that heating the syrup helps to kill some of the bacteria, so if you use the room temperature method, your simple syrup will go bad much more quickly.

Here are more recipes for other Asian herbs: 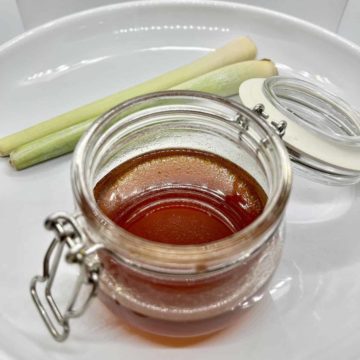 Note: keep in the fridge in an air tight container for up to 1 week. Toss if it turns cloudy.   The consistency of simple syrup is quite watery so don't expect something like maple syrup. If you want it thicker, you can cook it for a longer period of time (or make lemongrass rich simple syrup, which calls for twice the amount of sugar as water, instead.)   See post for ideas on how to use your homemade lemongrass syrup!
Tried this Recipe? Tag me Today!Mention @GreedyGirlGourmet or tag #greedygirlgourmet!